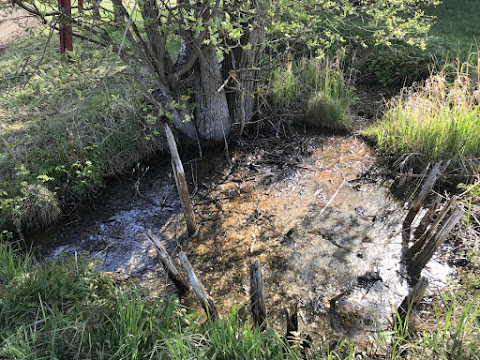 Levanluhta is among the most unique archaeological sites, even on a global scale. Bones belonging to nearly a hundred individuals who died in the Iron Age have been discovered in the middle of the Southern Ostrobothnia plains in western Finland since the 17th century. Today, three springs and their ferrous red water serve as reminders of this ancient burial site [Credit: Anna Wessman]

A multidisciplinary research group coordinated by the University of Helsinki dated the bones of dozens of Iron Age residents of the Levanluhta site in Finland, and studied the carbon and nitrogen stable isotope ratios. The results provide an overview of the dietary habits based on terrestrial, marine and freshwater ecosystems, as well as of sources of livelihoods throughout the Levanluhta era.

Ever since the 17th century, human bones have been emerging from the spring-containing lake burial site at Levanluhta in Southern Ostrobothnia, western Finland. The secrets of these Iron Age remains are now beginning to be revealed through measuring isotopes of atomic nuclei. A recently published study offers an overview of a diverse community that relied on an extremely broad range of livelihoods, which matches well with the understanding provided by archaeological discoveries.

The carbon and nitrogen in human food end up in the skeletal system and soft tissues as building blocks for the human body. There are three isotopes of carbon and two of nitrogen, and information pertaining to past events is recorded in the contents and ratios of these isotopes.