How and when the first modern human populations emerged out of Africa to settle Europe and Asia has been at the center of a long-standing debate among researchers and scholars. The results of a new genetic study, however, suggests that modern humans made their first successful major migration out of Africa around 55,000 – 60,000 years ago through Egypt, and not from further south through Ethiopia, as suggested by another proposed theory.
Dr. Luca Pagani, of the Wellcome Trust Sanger Institute and the University of Cambridge in the UK, and his colleagues analyzed the genetic information from six modern Northeast African populations (100 Egyptians, and five Ethiopian populations each represented by 25 people).
Read the rest of this article...
Posted by David Beard MA, FSA, FSA Scot at 10:06 AM No comments:

A new relative joins "Lucy" on the human family tree. An international team of scientists, led by Dr. Yohannes Haile-Selassie of The Cleveland Museum of Natural History, has discovered a 3.3 to 3.5 million-year-old new human ancestor species. Upper and lower jaw fossils recovered from the Woranso-Mille area of the Afar region of Ethiopia have been assigned to the new species Australopithecus deyiremeda. This hominin lived alongside the famous "Lucy's" species, Australopithecus afarensis. The species will be described in the May 28, 2015 issue of the international scientific journal Nature.

Lucy's species lived from 2.9 million years ago to 3.8 million years ago, overlapping in time with the new species Australopithecus deyiremeda. The new species is the most conclusive evidence for the contemporaneous presence of more than one closely related early human ancestor species prior to 3 million years ago. The species name "deyiremeda" (day-ihreme-dah) means "close relative" in the language spoken by the Afar people.

Australopithecus deyiremeda differs from Lucy's species in terms of the shape and size of its thick-enameled teeth and the robust architecture of its lower jaws. The anterior teeth are also relatively small indicating that it probably had a different diet.

Read the rest of this article...
Posted by David Beard MA, FSA, FSA Scot at 10:04 AM No comments: 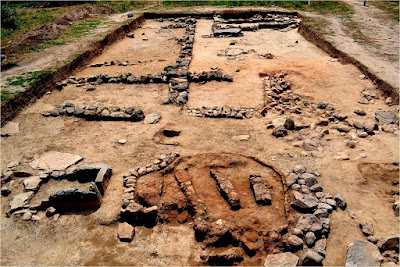 Read the rest of this article...
Posted by David Beard MA, FSA, FSA Scot at 10:00 AM No comments:

Occasioned by urban redevelopment projects involving housing schemes and business parks, the numerous successive archaeological excavations of recent decades in the town of Brumath and its surrounding area have helped to renew and considerably widen our knowledge of the antique city. Today, the wealth of discoveries prompts us to make an initial assessment of the settlement's development and the history of the territory of Brumath from Prehistory to the early Middle Ages. Central to the exhibition will be a review of the expansion of the Gallo-Roman city: urban topography, public and private buildings, aspects of daily life, production and trade, beliefs and religion, graveyards and funeral rites. The visitor will thus be offered an overall vision of the different aspects of Romanization and urban life in Alsace under Roman rule.

Read the rest of this article...
Posted by David Beard MA, FSA, FSA Scot at 9:56 AM No comments:

Read the rest of this article...
Posted by David Beard MA, FSA, FSA Scot at 3:23 PM No comments:

Human remains from a cave in northern Spain show evidence of a lethal attack 430,000 years ago, a study has shown.
Researchers examined one skull from a site called the Pit of Bones, which contains the remains of at least 28 people.
They concluded that two fractures on that skull were likely to have been caused by "multiple blows" and imply "an intention to kill".
The findings are published in the journal PLOS One.

Read the rest of this article...
Posted by David Beard MA, FSA, FSA Scot at 3:21 PM No comments:


A new species of ancient human has been unearthed in the Afar region of Ethiopia, scientists report.
Researchers discovered jaw bones and teeth, which date to between 3.3m and 3.5m years old.
It means this new hominin was alive at the same time as several other early human species, suggesting our family tree is more complicated than was thought.
The study is published in the journal Nature.
The new species has been called Australopithecus deyiremeda, which means "close relative" in the language spoken by the Afar people.

Read the rest of this article...
Posted by David Beard MA, FSA, FSA Scot at 3:14 PM No comments:

Danish Bronze Age girl may have been German

One of Denmark's proudest relics may not be Danish after all, researchers have found.


In a feat of laboratory sleuthing, scientists on Thursday provided a background to a mysterious Bronze Age teenager who died in modern-day Denmark 3,400 years ago.
The "Egtved Girl," uncovered at a village in the Jutland peninsula, was probably born in southwestern Germany and may have been married off to cement ties between powerful families, they said.
One of Denmark's proudest relics, the Egtved Girl was found in 1921 at a burial mound, inside an oak coffin that dates her interment to a summer's day in the year 1370 BC.

Read the rest of this article...
Posted by David Beard MA, FSA, FSA Scot at 6:26 PM No comments:

Dogs' special relationship to humans may go back 27,000 to 40,000 years, according to genomic analysis of an ancient Taimyr wolf bone reported in the Cell Press journal Current Biologyon May 21. Earlier genome-based estimates have suggested that the ancestors of modern-day dogs diverged from wolves no more than 16,000 years ago, after the last Ice Age.
The genome from this ancient specimen, which has been radiocarbon dated to 35,000 years ago, reveals that the Taimyr wolf represents the most recent common ancestor of modern wolves and dogs.
"Dogs may have been domesticated much earlier than is generally believed," says Love Dalén of the Swedish Museum of Natural History. "The only other explanation is that there was a major divergence between two wolf populations at that time, and one of these populations subsequently gave rise to all modern wolves." Dalén considers this second explanation less likely, since it would require that the second wolf population subsequently became extinct in the wild.
Read the rest of this article...
Posted by David Beard MA, FSA, FSA Scot at 5:34 PM No comments:


The world's oldest stone tools have been discovered, scientists report.
They were unearthed from the shores of Lake Turkana in Kenya, and date to 3.3 million years ago.
They are 700,000 years older than any tools found before, even pre-dating the earliest humans in the Homo genus.
The find, reported in Nature, suggests that more ancient species, such asAustralopithecus afarensis or Kenyanthropus platyops, may have been more sophisticated than was thought.
"They are significantly earlier than anything that has been found previously," said Dr Nick Taylor, from the National Centre of Scientific Research (CNRS) in France and the University of Leiden in the Netherlands.

Read the rest of this article...
Posted by David Beard MA, FSA, FSA Scot at 7:04 AM No comments:

An archeological dig in Pocklington has unearthed a prehistoric man buried with a shield.

The skeleton was found in one of the square barrows at the recently discovered Iron Age burial ground on Burnby Lane, which is where developer David Wilson Homes is planning to build 77 new houses.

MAP Archaeological Practice, the company which is carrying out the excavation work, says it has also discovered a man “of an impressive stature.”

The site has so far yielded more than 38 square barrows and in excess of 82 burials.

Read the rest of this article...
Posted by David Beard MA, FSA, FSA Scot at 8:47 AM No comments: 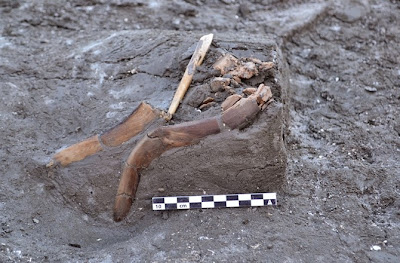 Read the rest of this article...
Posted by David Beard MA, FSA, FSA Scot at 8:42 AM No comments: