Europe's Earliest Humans Did Not Use Fire

New research conducted by scientists at the University of York and the Universitat Autonoma de Barcelona reveals for the first time that Europe's earliest humans did not use fire for cooking, but had a balanced diet of meat and plants - all eaten raw. 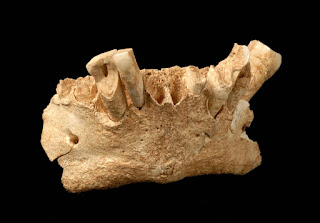 Studying dental plaque from a 1.2 million year old hominin (early human species), recovered by the Atapuerca Research Team in 2007 in Sima del Elefante in northern Spain, archaeologists extracted microfossils to find the earliest direct evidence of food eaten by early humans.These microfossils included traces of raw animal tissue, uncooked starch granules indicating consumption of grasses, pollen grains from a species of pine, insect fragments and a possible fragment of a toothpick.All detected fibres were uncharred, and there was also no evidence showing inhalation of microcharcoal - normally a clear indicator of proximity to fire.

Read the rest of this article...
Posted by David Beard MA, FSA, FSA Scot at 4:12 PM No comments:

SAINT HELIER, Jersey, Dec. 14 (UPI) -- Neanderthals may have taken vacations, or at least they liked the view from the granite cliffs of Jersey. New evidence suggests Neanderthals visited La Cotte de St Brelade, a prehistoric site on the island of Jersey, for at least 180,000 years.
Previous surveys of La Cotte de St Brelade have been limited in scope, focused mostly on concentrations of mammoth remains within the cave. The latest effort involved a wide-angle approach.
Researchers re-examined stone artifacts unearthed in the 1970s to better understand how they were made and where materials were sourced from. The survey helped archaeologists get a better sense of how visitors to La Cotte de St Brelade utilized local resources and the surrounding landscape. The analysis also revealed where Neanderthals were visiting from.
Read the rest of this article...
Posted by David Beard MA, FSA, FSA Scot at 5:33 PM No comments:

Sex of prehistoric hand-stencil artists can be determined forensic analysis


"This geometric approach is very powerful as it allows us to look at the palm and fingers independently," researcher Patrick Randolph-Quinney said.

Researchers built a model cave wall to test their ability to determine the sex of hand stencil artists in the lab. Photo by University of Liverpool

Attempts to determine the sex of prehistoric hand-stencil artists have turned up contradicting conclusions. Researchers in England and South Africa suggest focusing on hand size and finger length is unreliable.

"The problem with focussing on hand size and finger length is that two different shaped hands can have identical linear dimensions and ratios," Patrick Randolph-Quinney, a forensic anthropologist at the universities of Central Lancashire and Witwatersrand, said in a news release. "To capture shape, we applied geometric morphometrics, a technique used in forensic studies that had never been tested on hand stencils before."

Read the rest of this article...
Posted by David Beard MA, FSA, FSA Scot at 8:51 AM No comments: 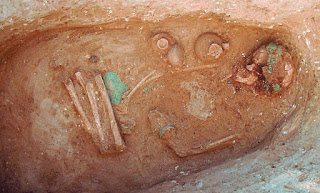 The skeleton of the young girl as found during the discovery of the tomb [Credit: Ethnos]

The coronet was unearthed among a trove of other valuable personal items found in the grave of a young girl thought to be between 6-7 years of age.

The diadem, which is comprised of three rows of spherical bronze plates mounted on a perishable material (leather or, more likely, a fabric), was wrapped at least twice around the girl's head.

Archaeologist Konstantinos Noulas said the skeleton of the girl, found in a strongly contacted position in the grave, was adorned with numerous jewels and precious items. Among these was a necklace with glass and carnelian beads, a bracelet, three bronze rings, two bronze girdles or belts, while pottery surrounded the interior of the grave.

Read the rest of this article...
Posted by David Beard MA, FSA, FSA Scot at 8:48 AM No comments:

Why don't humans have a penis bone? Scientists may now know


Speed of human mating might be behind the lack of a baculum in humans, suggests study tracing bone’s evolution 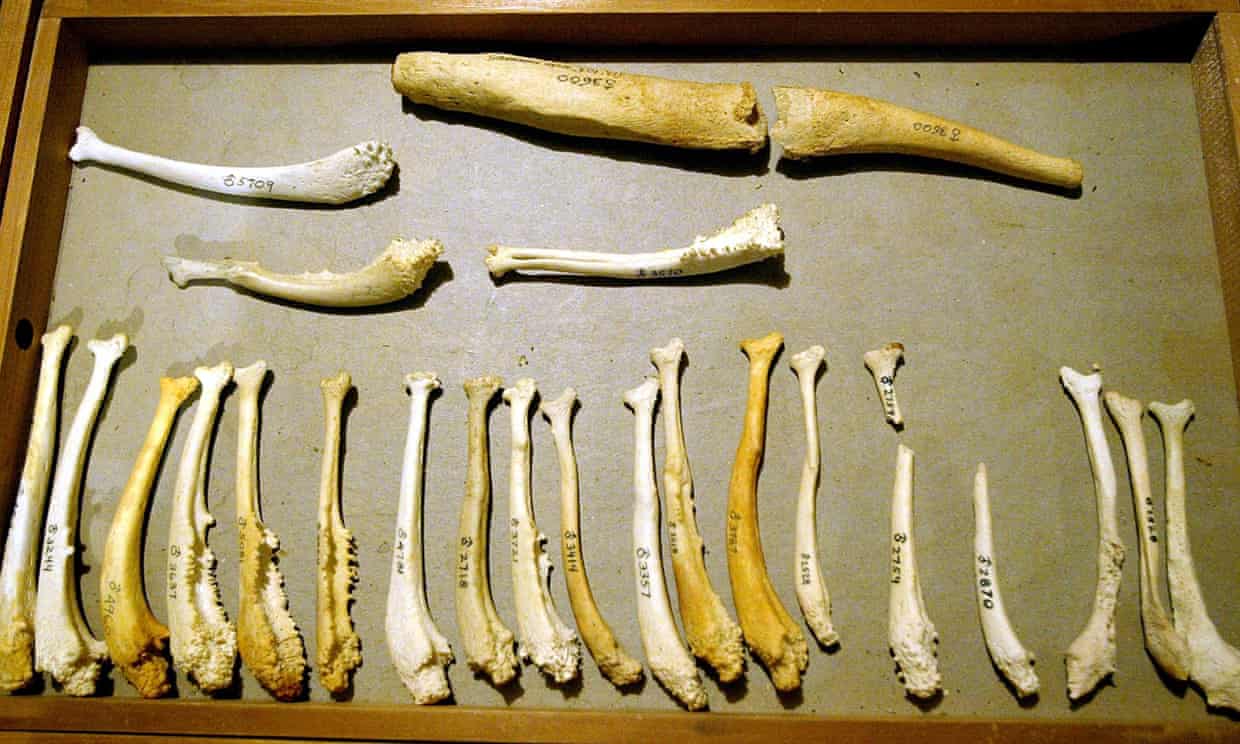 It can be as long as a finger in a monkey. In the walrus, it can be two feet long. But the human male has lost it completely. And researchers are a little stumped.
Known as the baculum to scientists with an interest, the penis bone is a marvel of evolution. It pops up in mammals and primates around the world, but varies so much in terms of length and whether it is present at all, that it is described as the most diverse bone ever to exist.
Prompted by the extraordinary differences in penis bone length found in the animal kingdom, scientists set out to reconstruct the evolutionary story of the baculum, by tracing its appearance in mammals and primates throughout history.
Read the rest of this article...
Posted by David Beard MA, FSA, FSA Scot at 8:45 AM No comments:

More than 70 years after the original cave was discovered, France will unveil a stunning real-to-life copy of the 18,000 year-old Lascaux cave, which cost €66 million and took four years to create.
The last of four boys who discovered the Lascaux cave paintings, a stunning display of prehistoric art in southwest France, will visit a new replica of the site Saturday.
Simon Coencas, now 89, will join President Francois Hollande for the inauguration of the display at a visitors' centre in Montignac, a village at the foot of the hills where he discovered the cave as a teenager.
More than seven decades after he got his first look at the site, Coencas will -- health permitting -- revisit a complete copy of the caves.
Read the rest of this article...
Posted by David Beard MA, FSA, FSA Scot at 7:51 PM No comments:

The vessels were interred in a burial mound near an Iron Age hillfort in Germany, known as the Heuneburg, reconstructed here.


Sometime between 600 and 450 B.C.E., a high-status individual in what is today Germany developed some disturbing symptoms: large bruises, bleeding from the nose and gums, and bloody diarrhea and urine. His fellow villagers, shocked—or perhaps intrigued—by his condition, stored his blood and organs in pottery vessels after he died, and interred them in a burial mound. Now, using a novel technique based on analyzing ancient proteins, archaeologists have reconstructed the contents of these vessels to conclude that the individual likely died from Crimean-Congo hemorrhagic fever virus (CCHFV), a severe tick-borne disease that still kills people across the world today.
"This is the first identification of CCHFV or any hemorrhagic fever virus in the archaeological record," says Conner Wiktorowicz, the study's lead researcher and a Ph.D. candidate in archaeology at Purdue University in West Lafayette, Indiana. It’s also the only known example of human blood and organs being buried in pottery vessels during this time in this region, raising the question of whether this was a more widespread practice, previously unknown to archaeologists.
The contents of ceramic vessels decay over time, leaving a film of residue containing proteins from any organic matter stored within. Archaeologists are exploring new ways to recover and analyze these proteins. In the new study, a team led by Wiktorowicz ground up a small portion of each of the pottery fragments (or sherds), used detergent and other chemicals to dislodge any proteins stuck to them, and isolated and analyzed the protein fragments using various techniques. The team then fed this information into a national protein database.
Read the rest of this article...
Posted by David Beard MA, FSA, FSA Scot at 5:37 PM No comments:

Archaeologists have been able to provide insights into the life of a man whose remains were found at an Iron Age site on Orkney.
A human jaw with two teeth was discovered centrally placed in a large, carved whalebone vertebra within the ruins of a broch earlier this year.
Analysis, including radiocarbon dates, of the find on South Ronaldsay show the man died when he was 50 or older.
His diet also appears to have been unusually rich in fish.

Read the rest of this article...
Posted by David Beard MA, FSA, FSA Scot at 7:54 AM No comments:

Two partial sets of human remains have been found at a massive neolithic site on Anglesey.
Archaeologists have also unearthed a fourth house from the period at the Llanfaethlu dig.
CR Archeology have been working at the site since late 2014 and have called the discoveries made there "unparalleled".
More than 6,000 artefacts have been recovered which is the most of any Prehistoric site in North Wales and these include a massive range of pottery styles from both the neolithic and Bronze age.
The discovery of two partial sets of human remains could cause a "revolution" in how historians view the origins of North Wales agriculture, say CR Archeology, who have been working with Anglesey Council, Wynne Construction and Gwynedd Archaeological Planning Services.
Read the rest of this article...
Posted by David Beard MA, FSA, FSA Scot at 7:53 AM No comments:

Read the rest of this article...
Posted by David Beard MA, FSA, FSA Scot at 7:44 AM No comments:

Archaeologists studying Neolithic and Early Bronze Age human remains in the Manx Museum collection for the ‘Round Mounds of the Isle of Man’ project have made an exciting discovery. Contained within a box of cremated bones excavated in 1947, osteologist Dr Michelle Gamble, discovered a collection of small bone objects that had not been noticed by the excavators. The bones had been buried almost 4000 years ago at Staarvey Farm in what is now German parish, Isle of Man. The site was excavated by Basil Megaw (1913-2002) who was director of the Manx Museum (1945-1957). Mr Megaw had been contacted by the farmer who had hit a large stone during ploughing. Excavations revealed a stone-built cist (a box made out of stone slabs) containing fragments of burnt bone, two flint tools, and two Collared Urns (Bronze Age pots) buried upside-down. But it is only now that the bones have been studied in detail.

Read the rest of this article...
Posted by David Beard MA, FSA, FSA Scot at 12:04 PM No comments: