Women in Corded Ware Culture may have been highly mobile and may have married outside their social group, according to a study published May 25, 2016 in the open-access journal PLOS ONE by Karl-Göran Sjögren from Göteborg University, Sweden, and colleagues. 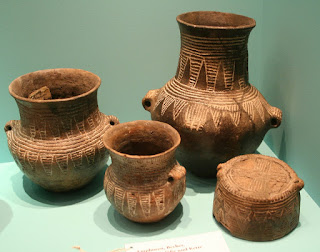 Examples of pottery from the Corded Ware period; these pieces date to ca. 2500 BC
[Credit: WikiCommons]

The Corded Ware Culture is archaeologically defined by material traits, such as the burial of the dead under barrows alongside characteristic cord-ornamented pottery, and existed in much of Europe from ca. 2800-2200 cal. B.C.

To better understand this culture, the authors of the present study examined human bones and teeth from seven sites in Southern Germany dating from different periods of Corded Ware culture, including two large cemeteries. They used carbon dating and additional dietary isotope analysis to assess the diet and mobility of the population during this period.

Neanderthals Were Stocky From Birth


If a Neanderthal were to sit down next to us on the underground, we would probably first notice his receding forehead, prominent brow ridges and projecting, chinless face. 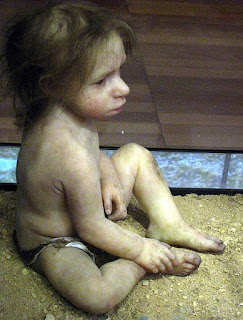 Only on closer inspection would we notice his wider and thicker body. Researchers from the Max Planck Institute for Evolutionary Anthropology in Leipzig have now investigated whether the differences in physique between Neanderthals and modern humans are genetic or caused by differences in lifestyle. Their analysis of two well-preserved skeletons of Neanderthal neonates shows that Neanderthals’ wide bodies and robust bones were formed by birth.

Read the rest of this article...
Posted by David Beard MA, FSA, FSA Scot at 6:24 PM No comments:

Read the rest of this article...
Posted by David Beard MA, FSA, FSA Scot at 6:21 PM No comments:

The structures were found deep inside the cave, so the builders would have needed fire to see


Researchers investigating a cave in France have identified mysterious stone rings that were probably built by Neanderthals.

The discovery provides yet more evidence that we may have underestimated the capabilities of our evolutionary cousins.

The structures were made from hundreds of stalagmites, the mineral deposits which rise from the floors of caves.

Dating techniques showed that they were broken off 175,000 years ago.

The findings are reported in the journal Nature.

Read the rest of this article...
Posted by David Beard MA, FSA, FSA Scot at 6:18 PM No comments: 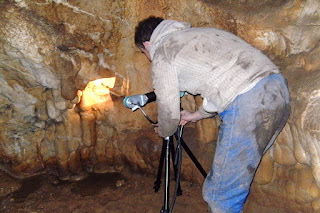 The Mäanderhöhle cave near Bamberg was previously regarded as an archaeological sensation. It was thought to contain some of the oldest cave art in Germany. However, Julia Blumenröther, a former student at Universität Erlangen-Nürnberg, has demonstrated in her Master's thesis that the markings discovered inside the cave in 2005 are not fertility symbols carved by humans as previously thought. In fact, these lines occurred as a result of natural processes, the archaeologist says.
One of the caverns in the 75-metre long cave is full of spherical deposits of minerals known as cave clouds that form on rocks in a similar way to stalactites and stalagmites. In 2005, cave researchers discovered a large number of lines that looked like they could have been made by humans on the rock-hard surface of these cave clouds. An archaeologist studied these lines several years later and published his interpretation of them in a preliminary report, in which he said that the between 14,000 and 16,000 year-old lines were made by humans and probably depicted a phallus and abstract female figures.
Read the rest of this article...

EVESHAM, ENGLAND—Archaeologists surveying a future development site in England’s West Midlands region were surprised to find a Bronze Age burial, reports the Worcester News. The team was following up on an earlier excavation at the site that revealed ditches thought to date to the Iron Age. In broadening their investigation to include a larger tract of land, the archaeologists discovered ditches with artifacts dating 1,000 years earlier than they expected, to the early Bronze Age. “The really unexpected find was a ‘beaker’ burial,” said Laurence Hayes of the environmental consulting firm RSK. “This large burial pit contained a near complete Early Bronze Age vessel known as a beaker, covered with intricate patterns, and a polished stone archer’s wrist guard.”

Two finds in one at Harray chamber


A prehistoric underground structure has been rediscovered in Harray – rediscovered in that the archaeologists found it to be full of Victorian rubbish!
But although it had obviously been opened,  entered and used in the 19th century, the chamber appears to have gone unrecorded.
Martin Carruthers, of the Archaeology Institute UHI, and county archaeologist Julie Gibson made their way out to the site, near the Harray Manse, last weekend.
Martin explained: “It’s either a souterrain or a ‘well’ and, given similar examples elsewhere in the county, probably dates to the Iron Age.
“The site was discovered by the landowner Clive Chaddock, who, happily, also happens to be a colleague at Orkney College UHI!
Read the rest of this article...
Posted by David Beard MA, FSA, FSA Scot at 10:48 AM No comments:

Hominins may have been food for carnivores 500,000 years ago

Tooth-marks on a 500,000-year-old hominin femur bone found in a Moroccan cave indicate that it was consumed by large carnivores, likely hyenas, according to a study* published April 27, 2016 in the open-access journal PLOS ONE by Camille Daujeard from the Muséum National D'Histoire Naturelle, France, and colleagues.
During the Middle Pleistocene, early humans likely competed for space and resources with large carnivores, who occupied many of the same areas. However, to date, little evidence for direct interaction between them in this period has been found. The authors of the present study examined the shaft of a femur from the skeleton of a 500,000-year-old hominin, found in the Moroccan cave "Grotte à Hominidés" cave near Casablanca, Morocco, and found evidence of consumption by large carnivores.
Read the rest of this article...
Posted by David Beard MA, FSA, FSA Scot at 9:16 PM No comments:

This is an image of a fossilized human molar used in the study of dietary habits of Neandertals and Upper Paleolithic Homo sapiens. Credit: Sireen El Zaatari
PLOS ONE—When fluctuating climates in the Ice Age altered habitats, modern humans may have adapted their diets in a different way than Neandertals, according to a study published April 27, 2016 in the open-access journal PLOS ONE by Sireen El Zaatari of the University of Tübingen, Germany, and colleagues.
The Neandertal lineage survived for hundreds of thousands of years despite the severe temperature fluctuations of the Ice Age. The reasons for their decline around 40 thousand years ago remain unclear. The authors of this study investigated the possible influence of dietary strategies using the fossilized molars of 52 Neandertals and Upper Paleolithic Homo sapiens (modern humans). They analysed the type and degree of microwear on the teeth to attempt to draw conclusions about diet type and to establish a relationship with prevalent climactic conditions.
Read the rest of this article...
Posted by David Beard MA, FSA, FSA Scot at 9:14 PM No comments:

study of DNA from ancient human bones has helped unlock the secrets of Europe's Ice Age inhabitants.
Researchers analysed the genomes of 51 individuals who lived between 45,000 years ago and 7,000 years ago.
The results reveal details about the biology of these early inhabitants, such as skin and eye colour, and how different populations were related.
It also shows that Neanderthal ancestry in Europeans has been shrinking over time, perhaps due to natural selection.
Read the rest of this article...
Posted by David Beard MA, FSA, FSA Scot at 12:05 AM No comments: