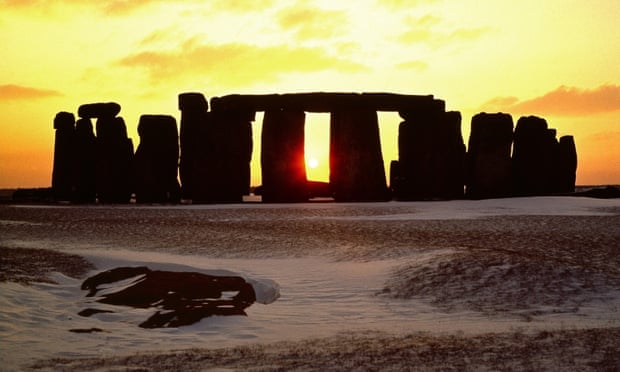 Some 3,400 years before the roaring torrent of the A303 road sliced theStonehenge landscape in half, some people cut a beautiful pit a metre deep into the chalk with no tools except picks made of red deer antlers.
They may have had primitive tools, but there was nothing primitive about their skills: the bottom of the pit was so neatly levelled that you could balance a beaker of mead on it without spilling a drop.
As druids and tourists head towards Stonehenge for the winter solstice, which falls this year on 22 December, when the midwinter sun should set framed perfectly by the giant stones, Historic England archaeologists are hard at work teasing ancient secrets out of the landscape.
Read the rest of this article...
Posted by David Beard MA, FSA, FSA Scot at 5:34 PM No comments:

Man's best friend came about after generations of wolves scavenged alongside humans more than 33,000 years ago in south east Asia, according to new research.
Dogs became self-domesticated as they slowly evolved from wolves who joined humans in the hunt, according to the first study of dog genomes.
And it shows that the first domesticated dogs came about 33,000 years ago and migrated to Europe, rather than descending from domesticated European wolves 10,000 years ago as had previously been thought.
Scientists have long puzzled over how man's best friend came into existence but there is conflicting evidence on when and where wild wolves were first tamed.
Read the rest of this article...
Posted by David Beard MA, FSA, FSA Scot at 8:46 AM No comments:

Stonehenge was moved by glaciers - not our prehistoric ancestors

The famous rocks of Stonehenge were not dragged by pagans but moved by glaciers, according to a team of Welsh academics.
Previously, a team of experts from University College London (UCL) claimed to have resolved the archaeological enigma, confirming that the stones were excavated and transported from two sites in Pembrokeshire by our prehistoric ancestors.
The team of archaeologists and geologists said Carn Goedog and Craig Rhos-y-felin, both in the Preseli Hills, had definitely been quarried for the mysterious stones.
They believe that between 4,000 and 5,000 years ago, rocks were taken from the Welsh mountain range by people and dragged away to where they currently stand, in Wiltshire.
But in a recent conflicting report, scientists have refuted UCL’s findings.
Read the rest of this article...
Posted by David Beard MA, FSA, FSA Scot at 4:18 PM No comments:

Millet: The missing link in prehistoric humans' transition from hunter-gatherer to farmer

Professor Martin Jones is pictured with millet in north China.


New research shows a cereal familiar today as birdseed was carried across Eurasia by ancient shepherds and herders laying the foundation, in combination with the new crops they encountered, of 'multi-crop' agriculture and the rise of settled societies. Archaeologists say 'forgotten' millet has a role to play in modern crop diversity and today's food security debate.
The domestication of the small-seeded cereal millet in North China around 10,000 years ago created the perfect crop to bridge the gap between nomadic hunter-gathering and organised agriculture in Neolithic Eurasia, and may offer solutions to modern food security, according to new research.
Read the rest of this article...
Posted by David Beard MA, FSA, FSA Scot at 6:31 PM No comments: 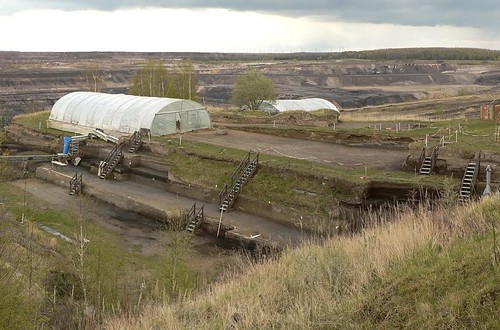 The Schöningen excavation site. Tangelnfoto, Wikimedia Commons
The Paleolithic site of Schöningen in north-central Germany is best known for the earliest known, completely preserved wooden spears (at least 10 recovered) by archaeologists under the direction of Dr. Hartmut Thieme between 1994 and 1998 at an open-cast lignite mine. Deposited in organic sediments on an ancient lakeshore, they were found in combination with the remains of about 16,000 animal bones, including 20 to 25 butchered wild horses, whose bones featured numerous butchery marks, including one pelvis that still had a spear protruding from it. The finds are considered evidence that early humans were active hunters with specialized tool kits as early as 300,000 or more years ago.
Now, a series of detailed study reports on the Schöningen findings have been published online in the Journal of Human Evolution. Altogether, they present a picture of groups of prehistoric hunters who sojourned at sites in the Schöningen area about 300,000+ years ago and hunted and processed mammalian species such as wild horse and red deer using tools/weapons made of wood, stone and bone. The findings have changed the long-accepted paradigm of a more primitive early human hunting culture during this time period that featured primarily stone tools and weapons and a somewhat more limited subsistence strategy.
Read the rest of this article...
Posted by David Beard MA, FSA, FSA Scot at 6:18 PM No comments:

6,000-year-old skeletons in French pit came from victims of violence

CIRCLE OF DEATH  A circular pit excavated in France (left) contains the remains of eight people probably killed in a violent attack around 6,000 years ago. Seven severed left arms lay at the bottom of the pit. A diagram of the pit discoveries denotes bones of each individual in different colors.


A gruesome discovery in eastern France casts new light on violent conflicts that took lives — and sometimes just limbs — around 6,000 years ago.

Excavations of a 2-meter-deep circular pit in Bergheim revealed seven human skeletons plus a skull section from an infant strewn atop the remains of seven human arms, say anthropologist Fanny Chenal of Antea Archéologie in Habsheim, France, and her colleagues.

Two men, one woman and four children were killed, probably in a raid or other violent encounter, the researchers report in the December Antiquity. Their bodies were piled in a pit that already contained a collection of left arms hacked off by axes or other sharp implements. Scattered hand bones at the bottom of the pit suggest that hands from the severed limbs had been deliberately cut into pieces.

Read the rest of this article...
Posted by David Beard MA, FSA, FSA Scot at 5:58 PM No comments:


Archaeologists in the east Moravian town of Přerov have discovered a unique statuette which they believe dates back to the early Neolithic period. The richly ornamented torso has been hidden under ground for over seven thousand years ago. 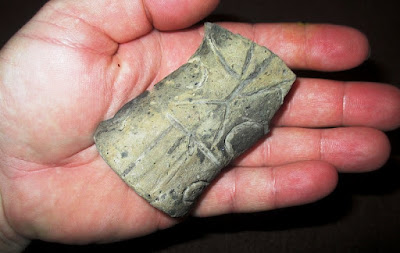 The richly engraved torso of a Neolithic figurine was found at an archaeological  site in the Czech Republic [Credit: Zdeněk Schenk]

The valuable finding was discovered during initial excavations of an archaeological site near Lipník nad Bečvou, a small town on the edge of the Moravian Gate valley. It is a torso of a body, or what the archaeologists call an anthropomorphic sculpture, richly engraved with geometric ornaments. It is about 76 millimetres tall and its head and arms have been broken off.

According to the head of the archaeological research at the site Zdeněk Schenk, the statuette must be at least seven thousand years old, since it was found on the site of an early Neolithic settlement:

Read the rest of this article...
Posted by David Beard MA, FSA, FSA Scot at 5:44 PM No comments:

Did our ancient ancestors 'kill the cat'?


Our ancient human cousins may have fought off big cats with spears, according to archaeological evidence.
The sabre-toothed cat lived alongside early humans, and may have been a fearsome enemy, say scientists.
Several feline teeth - and a chunk of arm bone - were uncovered at a site in Germany known for the oldest discovery of human spears.
The 300,000-year-old animal fossils are described as "spectacular".
The sabre-toothed cat - once known as the sabre-toothed tiger - lived from about 55.8 million to 11,700 years ago.
Read the rest of this article...
Posted by David Beard MA, FSA, FSA Scot at 11:11 AM No comments: 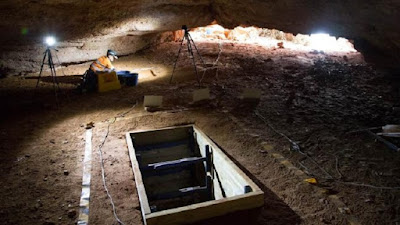 Although teaching is useful, it is not essential for cultural progress.
Image courtesy of Shutterstock


A new study from the University of Exeter has found that teaching is not essential for people to learn to make effective tools.
The results counter established views about how human tools and technologies come to improve from generation to generation and point to an explanation for the extraordinary success of humans as a species. The study reveals that although teaching is useful, it is not essential for cultural progress because people can use reasoning and reverse engineering of existing items to work out how to make tools.
The capacity to improve the efficacy of tools and technologies from generation to generation, known as cumulative culture, is unique to humans and has driven our ecological success. It has enabled us to inhabit the coldest and most remote regions on Earth and even have a permanent base in space. The way in which our cumulative culture has boomed compared to other species however remains a mystery.
Read the rest of this article...
Posted by David Beard MA, FSA, FSA Scot at 10:46 AM No comments:

Human nature’s dark side helped us spread across the world

New research by an archaeologist at the University of York suggests that betrayals of trust were the missing link in understanding the rapid spread of our own species around the world.


Dr Penny Spikins, of the University’s Department of Archaeology, says that the speed and character of human dispersals changed significantly around 100,000 years ago.
Before then, movement of archaic humans were slow and largely governed by environmental events due to population increases or ecological changes. Afterwards populations spread with remarkable speed and across major environmental barriers.
Read the rest of this article...
Posted by David Beard MA, FSA, FSA Scot at 10:43 AM No comments: