Similar characteristics have not been observed in other constructions of the Bronze Age, with three-metre thick walls, square towers originally measuring up to seven metres, a monumental entrance and an ogival arched postern gate; a fully conserved architectural element unique in Europe in that period.

The wall protected a city measuring 4 hectares located on top of a hill. With architectural elements reminiscent of people with Eastern styled military skills, its model is typical of ancient civilisations of the Mediterranean, such as the second city of Troy.

The alignment and characteristics reveal a shrewd defence strategy which represented a new way of fighting, and the implementation of a violent and class-based power structure which conditioned the development of other communities in the Iberian Peninsula during the following seven centuries.
The discovery poses new questions about what is known of the origin of economic and political inequalities in Europe, the formation of the military and the role violence played in the formation of identities.

The discoveries made in the past few years at La Bastida point to the importance of this site in Prehistoric Europe, comparable only to the Minoan civilisation of Crete, and represent a strong addition to the projection of heritage in the region of Murcia, Spain and Europe in general.

Read the rest of this article...
Posted by David Beard MA, FSA, FSA Scot at 10:39 AM No comments:

An Iron Age mirror discovered by a metal detectorist in Dorset has been put up for sale.

The finely decorated Chesil Mirror and a number of other items were discovered in a grave between Abbotsbury and Chickerell in 2010.

Dorset County Museum is hoping to raise £23,000 to buy the artefacts for its collection and prevent them from being taken overseas.

The money would be split between the finder and the landowner.

The copper-alloy mirror is similar to the Portesham Mirror - already part of the museum's collection - which was acquired in 1994. Fewer than 30 of its type have been discovered in the UK.

Read the rest of this article...
Posted by David Beard MA, FSA, FSA Scot at 11:34 AM No comments:

Mystery … a skeleton made up of the bones of several individuals. Photo: Theresa Ambrose

IT IS one of Britain's most intriguing archaeological finds. When two almost perfectly preserved 3000-year-old skeletons were dug up on a remote Scottish island they were the first evidence that ancient Britons preserved their dead using mummification.

The scientists who uncovered the skeletons also found clues that one of them, apparently a man buried in a crouching position, was not a single individual, but had been assembled from the body parts of different people.

The discovery began a 10-year investigation into what had led the Bronze Age islanders to this strange fate. Now, a study using the latest technology has found that the two skeletons together comprise the remains of at least six individuals who died several hundred years apart

Read the rest of this article...
Posted by David Beard MA, FSA, FSA Scot at 11:11 AM No comments:

Archaeologists say an innovative aerial laser survey has uncovered new clues to the history of a Pembrokeshire island.

Skokholm, best known for its colony of breeding seabirds, was known to have been settled in prehistoric times.

The Royal Commission on the Ancient and Historical Monuments of Wales says a new laser survey from the air shows detail of Iron Age and medieval use.

The research team involved now plans to visit the island to look for more evidence on the ground.

Read the rest of this article...
Posted by David Beard MA, FSA, FSA Scot at 11:08 AM No comments: 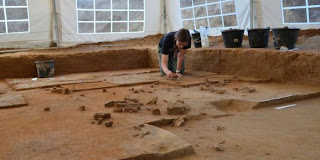 In an international co-operation project, archaeologists from the Monrepos Archaeological Research Centre and Museum for the Evolution of Hominin Behaviour, part of the Römisch-Germanisches Zentralmuseum, (RGZM) and the Landesamt für Denkmalpflege and Archäologie in Saxony-Anhalt are excavating the 35,000 year old site of Breitenbach, close to Zeitz in Saxony-Anhalt. Other co-operation partners are the Faculty of Archaeology at the University of Leiden (NL), the Ludwig Boltzmann Institute of Archaeological Prospection and Virtual Archaeology (ArchPro) in Vienna, the Institute of Geoinformatics i3mainz of the University of Applied Sciences in Mainz as well as the Institutes of Geosciences at the universities of Mainz, Tübingen and Cologne.

The story of human ancestors used to be writ only in bones and tools, but since the 1960s DNA has given its own version of events. Some results were revelatory, such as when DNA studies showed that all modern humans descended from ancestors who lived in Africa more than 100,000 years ago. Others were baffling, suggesting that key events in human evolution happened at times that flatly contradicted the archaeology.

Now archaeologists and geneticists are beginning to tell the same story, thanks to improved estimates of DNA’s mutation rate — the molecular clock that underpins genetic dating1–4. “It’s incredibly vindicating to finally have some reconciliation between genetics and archaeology,” says Jeff Rose, an archaeologist at the University of Birmingham, UK. Archaeologists and geneticists may now be able to tackle nuanced questions about human history with greater confidence in one another’s data. “They do have to agree,” says Aylwyn Scally, an evolutionary genomicist at the Wellcome Trust Sanger Institute in Hinxton, UK. “There was a real story.”

Read the rest of this article...
Posted by David Beard MA, FSA, FSA Scot at 11:49 AM No comments: 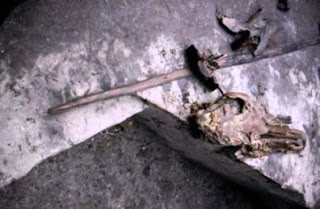 Finds from early stone age site in north-central Germany show that human ingenuity is nothing new - and was probably shared by now-extinct species of humans.

Archaeologists from the University of Tübingen have found eight extremely well-preserved spears -- an astonishing 300,000 years old, making them the oldest known weapons anywhere. The spears and other artifacts as well as animal remains found at the site demonstrate that their users were highly skilled craftsmen and hunters, well adapted to their environment - with a capacity for abstract thought and complex planning comparable to our own. It is likely that they were members of the species Homo heidelbergensis, although no human remains have yet been found at the site.

The project is headed by Prof. Nicholas Conard and the excavations are supervised by Dr. Jordi Serangeli, both from the University of Tübingen's Institute of Prehistory, which has been supporting the local authority's excavation in an open-cast brown coal mine in Schöningen since 2008. They are applying skills from several disciplines at this uniquely well-preserved site find out more about how humans lived in the environment of 300,000 years ago.

Our evolutionary cousins the Neanderthals were harvesting feathers from birds in order to use them as personal ornaments, a study suggests.

The authors say the result provides yet more evidence that Neanderthal thinking ability was similar to our own.

The analysis even suggests they had a preference for dark feathers, which they selected from birds of prey and corvids - such as ravens and rooks.

Details of the research appear in Plos One journal.

Read the rest of this article...
Posted by David Beard MA, FSA, FSA Scot at 11:35 AM No comments:

An ancient ceremonial site the size of Stonehenge has been discovered on the North Downs.
The exact purpose of the site - a neolithic “henge” near Hollingbourne - remains shrouded in mystery, but a large amount of burnt bone and pottery uncovered suggest it was used in a ritual capacity for almost 2000 years, as far back as 2500BC, the end of the Stone Age.

Dr Paul Wilkinson (pictured below) of the Kent Archaeological Field School, which led the investigation, said the first tantalising clue had come in the form of a circular mark spotted in satellite images of a tract of land called The Holmsdale, near the Pilgrims Way.

Digging began last month and has revealed a 50 metre wide henge - a large earthwork consisting of a circular area surrounded by a ditch and a perimeter bank - which has horn shaped entrances to the east and west.

Read the rest of this article...
Posted by David Beard MA, FSA, FSA Scot at 12:22 PM No comments:

The ancient builders of Stonehenge may have had a surprisingly meaty diet and mobile way of life. Although farming first reached the British Isles around 6,000 years ago, cultivation had given way to animal raising and herding by the time Stonehenge and other massive stone monuments began to dot the landscape, a new study finds.

Agriculture’s British debut occurred during a mild, wet period that enabled the introduction of Mediterranean crops such as emmer wheat, barley and grapes, say archaeobotanists Chris Stevens of Wessex Archaeology in Salisbury, England, and Dorian Fuller of University College London. Farming existed at first alongside foraging for wild fruits and nuts and limited cattle raising, but the rapid onset of cool, dry conditions in Britain about 5,300 years ago spurred a move to raising cattle, sheep and pigs, Stevens and Fuller propose in the September Antiquity.

With the return of a cultivation-friendly climate about 3,500 years ago, during Britain’s Bronze Age, crop growing came back strong, the scientists contend. Farming villages rapidly replaced a mobile, herding way of life.