EUROPEAN SOCIETY OF HUMAN GENETICS—Milan, Italy: Interest in the origins of human populations and their migration routes has increased greatly in recent years. A critical aspect of tracing migration events is dating them. However, the radiocarbon techniques*, that are commonly used to date and analyze DNA from ancient skeletons can be inaccurate and not always possible to apply. Inspired by the Geographic Population Structure model that can track mutations in DNA that are associated with geography, researchers have developed a new analytic method, the Time Population Structure (TPS), that uses mutations to predict time in order to date the ancient DNA.

Dr Umberto Esposito, a postdoctoral researcher in the laboratory of Dr Eran Elhaik, Department of Animal and Plant Sciences at the University of Sheffield, Sheffield, UK, will tell the annual conference of the European Society of Human Genetics today (Monday) that TPS can calculate the mixtures of DNA deriving from different time periods to estimate its definitive age. “This introduces a completely new approach to dating. At this point, in its embryonic state, TPS has already shown that its results are very similar to those obtained with traditional radiocarbon dating.

Read the rest of this article...
Posted by David Beard MA, FSA, FSA Scot at 11:44 AM No comments:

Enigmatic Stone Balls from 5,000 Years Ago Continue to Baffle Archaeologists

The 3D models of the carved balls of stone, including the spiral-carved Towie ball (center), are now posted online.  Credit: National Museums Scotland

Some of the most enigmatic human-made objects from Europe's late Stone Age — intricately carved balls of stone, each about the size of a baseball — continue to baffle archaeologists more than 200 years after they were first discovered.

More than 500 of the enigmatic objects have now been found, most of them in northeast Scotland, but also in the Orkney Islands, England, Ireland and one in Norway.

Archaeologists still don't know the original purpose or meaning of the Neolithic stone balls, which are recognized as some of the finest examples of Neolithic art found anywhere in the world. But now, they've created virtual 3D models of the gorgeous balls, primarily to share with the public. In addition, the models have revealed some new details, including once-hidden patterns in the carvings on the balls.

Read the rest of this article...
Posted by David Beard MA, FSA, FSA Scot at 11:41 AM No comments: 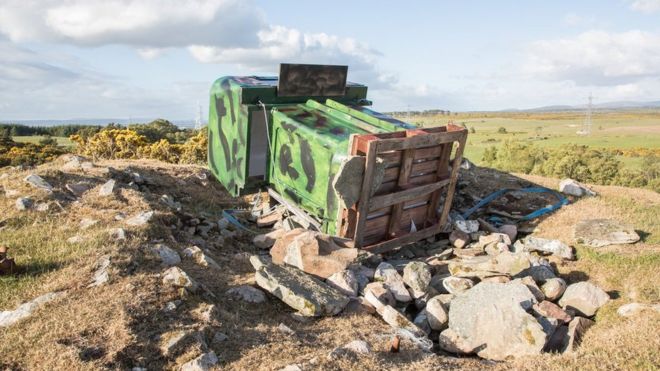 Read the rest of this article...
Posted by David Beard MA, FSA, FSA Scot at 11:23 AM No comments: 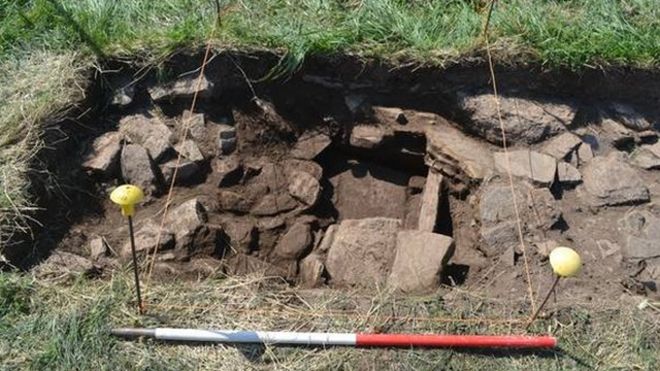 Read the rest of this article...
Posted by David Beard MA, FSA, FSA Scot at 5:43 PM No comments: 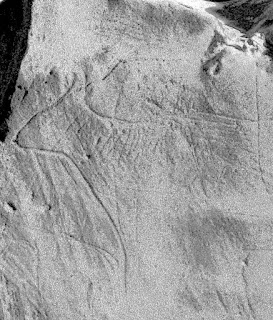 Two researchers from Universidad Politécnica de Madrid (UPM) in collaboration with a researcher from Czech University of Life Sciences Prague (CULS) have developed a methodology to detect archaeological elements invisible to the naked eye.

Starting from photographs taken with common digital cameras and the range of the visible spectrum, a team of researchers from School of Land Surveying, Geodesy and Mapping Engineering at UPM and Faculty of Environmental Sciences from CULS suggest a new non-invasive methodology of archaeological documentation and analysis to show digital elements that are invisible to the naked eye. The method consists of applying techniques of both remote sensing and spectral treatment in order to uncover hidden elements and later carry out their morphometric analysis.

Mercedes Farjas, Aroa Gutiérrez and José Antonio Domínguez started by studying a limestone mold in the lab. The first goal was to assess the influence of the angle of the light of the photographs.

Later, after studying the effect of diverse filters on the mold, the researchers carried out combination tests of the filters in order to create a protocol of sequential application that allowed them to obtain conclusive results. As a result of these tests, they selected a set of filters and established an order of application. 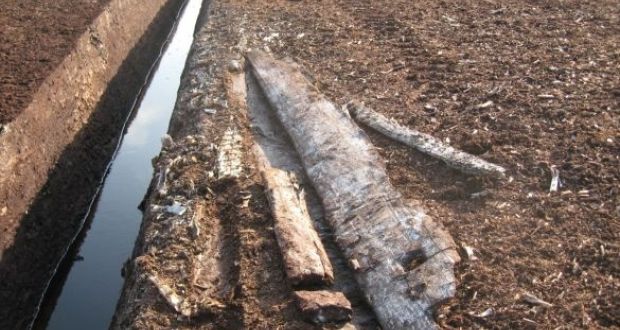 Bronze Age track at Mayne Bog: when Westland Horticulture uncovered it in 2005 the National Monuments Service did not issue a preservation order or record it in the Register of Historic Monuments

Bronze Age track at Mayne Bog: when Westland HoA 3,000-year-old, oak road through Mayne bog, near Coole in Co Westmeath is to be protected following an agreement between peat extraction companies and conservationists.

Under the terms of the agreement approved by the High Court, Westland Horticulture Limited, Westmeath Peat Limited and Cavan Peat Limited have committed to cease milling peat near the bronze-age road and establish a buffer zone around it and associated subterranean structural supports.

The agreement also provides for the development of a “bund” to prevent operations elsewhere from dewatering the area around the oak road and structures.

Read the rest of this article...
Posted by David Beard MA, FSA, FSA Scot at 10:42 AM No comments:

When prehistoric man lived around Glasgow

The Cochno Stone at Faifley was excavated in 2015 and 2016 and then reburied to protect it from damage. PIC: John Devlin/TSPL.

Prehistoric man was likely to have lived in a number of settlements scattered around present-day Glasgow, research has found. Analysis of ancient rock art sites has identified a “ring” of probable settlements around the city with the creation of Glasgow likely to have destroyed further evidence of Neolithic life in the area.

People settled close to the River Clyde from at least 3,000BC given the area’s quality farmland and good access to waterways, experts believe. READ MORE: Archaeologists hit jackpot after sun reveals Neolithic markings The findings come as Scotland’s Rock Art Project works with communities across the country to record in detail some 2,000 ancient sites where mysterious cup and ring carvings can be found.

Read the rest of this article...
Posted by David Beard MA, FSA, FSA Scot at 10:38 AM No comments: 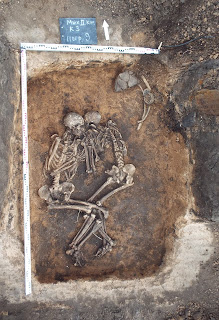 Read the rest of this article...
Posted by David Beard MA, FSA, FSA Scot at 10:26 AM No comments: 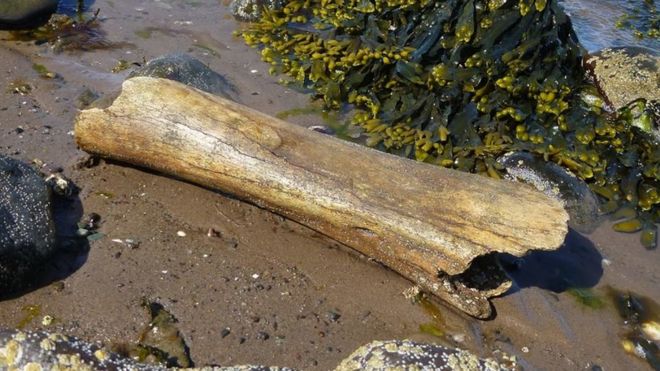 A bone believed to have come from a woolly mammoth has been discovered on the south of Scotland coastline.

The find was made near Stranraer by Nic Coombey, co-ordinator of the Solway Coastwise project.

He said he realised straight away that it was an "extraordinary thing" due to its size.

It has now been passed to National Museums Scotland to carry out tests in order to find out exactly how old the bone might be.

Read the rest of this article...
Posted by David Beard MA, FSA, FSA Scot at 10:23 AM No comments: 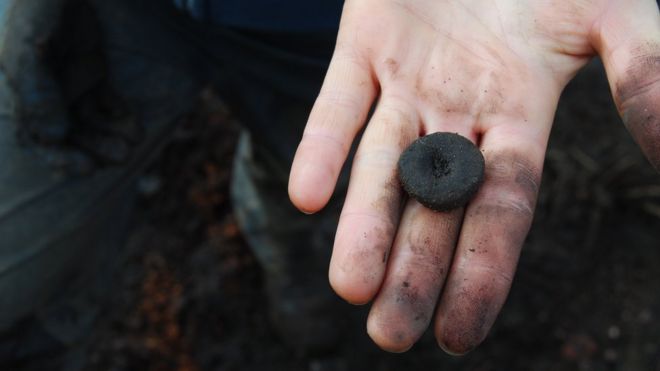 A stone bead or spindle whorl from the excavation
AOC ARCHAEOLOGY

The remains of an ancient roundhouse have been uncovered by archaeologists in the Highlands.

The prehistoric property was excavated ahead of the construction of a new business park at Mullan's Wood at Tore, near Inverness.

Archaeologists said the roundhouse may have been built in the Iron Age 2,000 years ago, or earlier.

The excavation area has been reinstated and the site will be protected during the future building work.

Environmental samples taken during the fieldwork has the potential to provide material for dating the site.

Read the rest of this article...
Posted by David Beard MA, FSA, FSA Scot at 10:21 AM No comments:

Take your pick: Is this Britain's oldest tin mining tool?

A pick made from a deer antler found near Truro in the 1800s has been on show at the Royal Cornwall Museum for decades.

Part of the prehistoric tool has now been radiocarbon dated, revealing that it is about 3,500 years old.

Simon Timberlake, a freelance archaeologist from Cambridge, said it's still in a remarkable condition