Spanish cave art was made by Neanderthals, study confirms 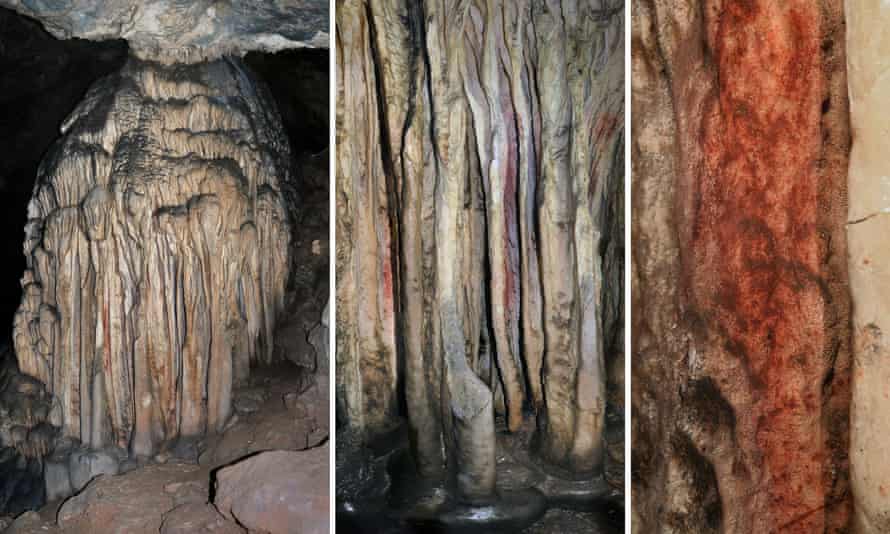 A general view (left), medium close-up (middle) and extreme close up of a partly coloured stalagmite tower in the Spanish cave of Ardales, southern Spain.
Photograph: Joao Zilhao/ICREA/AFP/Getty Images
Study says pigments on cave stalagmites were applied through ‘splattering and blowing’ more than 60,000 years ago
Neanderthals, long perceived to have been unsophisticated and brutish, really did paint stalagmites in a Spanish cave more than 60,000 years ago, according to a study published on Monday.
The issue had roiled the world of paleoarchaeology ever since the publication of a 2018 paper attributing red ocher pigment found on the stalagmitic dome of Cueva de Ardales to our extinct “cousin” species.
The dating suggested the art was at least 64,800 years old, made at a time when modern humans did not inhabit the continent.
But the finding was contentious, and “a scientific article said that perhaps these pigments were a natural thing”, a result of iron oxide flow, Francesco d’Errico, co-author of a new paper in the journal PNAS, told AFP.
Read the rest of this article..
Posted by David Beard MA, FSA, FSA Scot at 4:36 PM No comments:

Sample of the core from Stone 58 (British Geological Survey)
"We have CT-scanned the rock, zapped it with X-rays, looked at it under various microscopes and analyzed its sedimentology and chemistry," said study lead author David Nash, a professor of physical geography at the University of Brighton in England.
"With the exception of thin-section analyses and a couple of the chemical methods, all of the techniques we used in the study were new both to Stonehenge and the study of sarsen stones in the UK," Nash told Live Science in an email.
Stonehenge's central circle of pillars was erected during the Neolithic period, about 2,500 years ago, according to English Heritage, a nonprofit organization that manages historic monuments in England.
"Sarsens were erected in two concentric arrangements – an inner horseshoe and an outer circle – and the bluestones [smaller monument stones] were set up between them in a double arc," English Heritage said on its website.
Read the rest of this article...
Posted by David Beard MA, FSA, FSA Scot at 4:31 PM No comments: 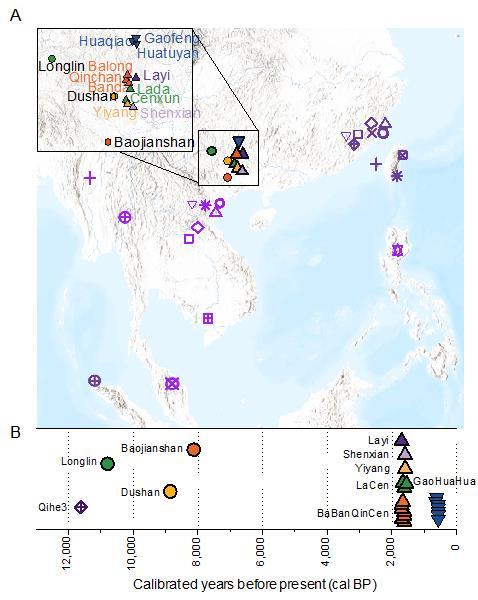 IMAGE: GEOGRAPHICAL AND TEMPORAL DISTRIBUTION OF NEWLY SAMPLED INDIVIDUALS
A joint research team led by Prof. FU Qiaomei from the Institute of Vertebrate Paleontology and Paleoanthropology (IVPP) of the Chinese Academy of Sciences sequenced the ancient genomes of 31 individuals from southern East Asia, thus unveiling a missing piece of human prehistory.
The study was published in Cell on June 24.
Prof. FU's team used DNA capture techniques to retrieve ancient DNA from Guangxi and Fujian, two provincial-level regions in southern China. They sequenced genome-wide DNA from 31 individuals dating back 11,747 to 194 years ago. Of these, two date back to more than 10,000 years ago, making them the oldest genomes sampled from southern East Asia and Southeast Asia to date.
Read the rest of this article...
Posted by David Beard MA, FSA, FSA Scot at 4:16 PM No comments: