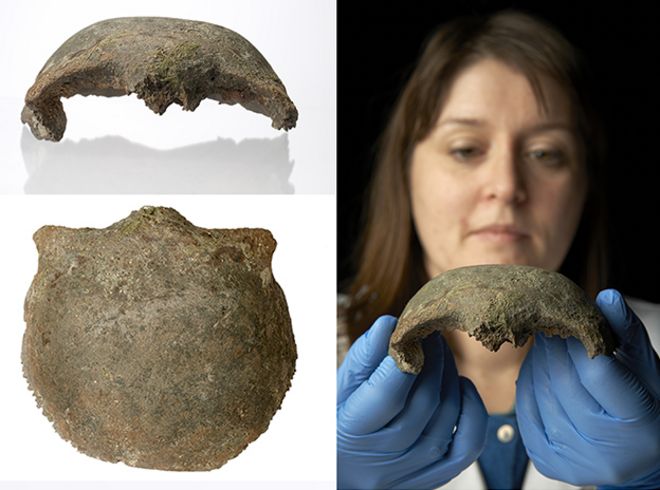 The frontal bone was radiocarbon dated to 3,600 BC
MUSEUM OF LONDON

Here's a piece of history pulled from the muddy banks of the River Thames.

It's a skull fragment that is 5,600 years old. It dates to a time long before there was any permanent settlement on the site we now know as London.

Investigations indicate it belonged to a male over the age of 18.

There are older Neolithic remains that have been recovered in the region, but what makes this specimen especially interesting is that it's the earliest ever skull found by "mudlarkers".

If you haven't heard of them before - they're the band of mostly amateur archaeologists who scour the Thames' edges at low tide for objects of intrigue and antiquity. And they're constantly picking up fascinating items - many of which end up in the Museum of London, where this frontal bone will now be displayed from Wednesday. 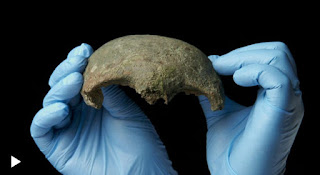 Scientists know the Stonehenge early phase standing stones (the so-called bluestones rather than the later more famous and much larger sarsen stones) come from this and other Pembrokeshire prehistoric quarries – because of chemical identification tests they have carried out on the rocks.
So far, only two quarries have been identified – both on the northern slopes of the Preseli Hills in Pembrokeshire, southwest Wales - but geologists, who have studied the Stonehenge bluestones, think it is likely there were at least three or four other quarries that have yet to be found.
The discovery of the tools is likely to rekindle one of archaeology’s biggest debates – how did the builders of Stonehenge transport the bluestones (an estimated 79 of them, each weighing approximately 2 tonnes) from southwest Wales to Salisbury Plain.
Read the rest of this article...
Posted by David Beard MA, FSA, FSA Scot at 8:11 PM No comments:

Suspected Neanderthal footprints have been found in Gibraltar

A footprint which could belong to one of the last Neanderthals to walk the Earth has been found in Gibraltar.
Although most Neanderthals died out by around 40,000 years ago, some did survive at the edge of the Iberian peninsular, where stone tools prove they were still alive around 28,000 years ago.
Now researchers at The Gibraltar National Museum, who have spent the last decade studying ancient paths in the sand dunes above Catalan Bay, believe they have discovered the footprint of a teenage Neanderthal who lived around 29,000 years ago.
Read the rest of this article...
Posted by David Beard MA, FSA, FSA Scot at 9:40 AM No comments:

The remains of the largest Neolithic hall found in Britain, which was were discovered in Carnoustie, Angus.
PIC: GUARD Archaeology.

The largest Neolithic house in Britain was built in Scotland around 6,000 years ago, archaeologists have confirmed

Two halls which were used as houses and likely home to large numbers of people have been discovered in Carnoustie, Angus.

The site is far larger and older than previously thought with archaeological work shedding new light on some of Scotland’s earliest communities.

Analysis shows food was processed and consumed in the halls with pottery made and used there.

It is possible that animals were also kept in part of the building.

Read the rest of this article...
Posted by David Beard MA, FSA, FSA Scot at 9:37 AM No comments: 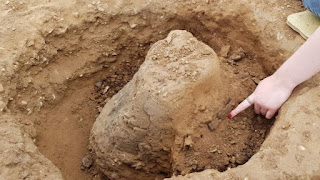 Archaeologists and volunteers have found an important prehistoric burial site near Beaulieu dating back thousands of years.
A community dig in a field at East End set out to investigate what they thought was a Bronze Age barrow which had been ploughed over and they were thrilled to find four cremation burial urns dating from that period around 3,000 years ago.

But as the excavation progressed further, the evidence began suggesting that the site might have been an important place for even older human activity which Bronze Age settlers then adapted.

New Forest National Park Authority Community Archaeologist James Brown said: ‘We were elated to find the urns – they were inverted in what we originally thought was the ditch around the barrow and one has a decorative band pattern on it that will help us to date them. These urns were domestic pots and contain cremated human bone placed into small pits. So we know this site was a place of memorial for people in the New Forest around 3,000 years ago.

Read the rest of this article...
Posted by David Beard MA, FSA, FSA Scot at 9:06 AM No comments: 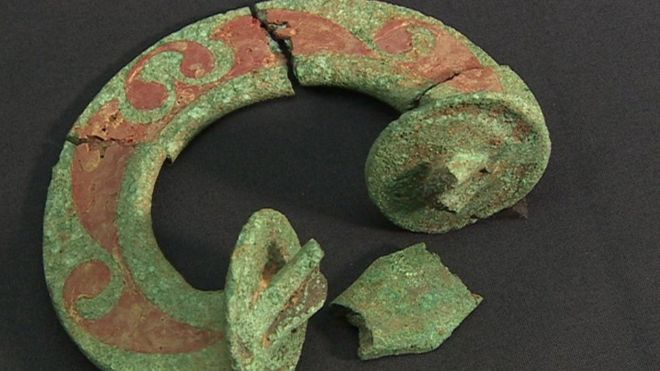 his terret ring would have guided the chariot reins
Parts of an Iron Age chariot found by a metal detectorist have been declared treasure by the Pembrokeshire coroner.
Mike Smith made the discovery in February 2018 on farmland in the south of the county.
The court at Milford Haven heard on Thursday the finds were part of the ritual burial of an entire chariot and that the site is now legally protected.
Mr Smith says the 2,000-year-old finds could be worth a "life-changing" six to seven figure sum.
The nine artefacts are now Crown property and a independent valuation committee will decide on the payment to Mr Smith.

Read the rest of this article...
Posted by David Beard MA, FSA, FSA Scot at 8:59 AM No comments:

Read the rest of this article...
Posted by David Beard MA, FSA, FSA Scot at 8:50 AM No comments: