Directly following the last ice age, people from the western parts of what is now Norway were a population that had substantially different genetics from the people living in the area corresponding to present-day Sweden. 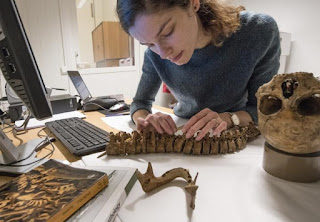 "We were surprised that the results showed such marked dissimilarities," says associate professor and archaeologist Birgitte Skar at the Norwegian University of Science and Technology's (NTNU) University Museum. Skar is responsible for the museum's Stone Age and Bronze Age collections.

Scandinavia was one of the last parts of Europe to become habitable when the glaciers released their icy grip more than 10,000 years ago. The ocean's resources and the coastal archipelago attracted marine hunter-gatherers of yore to the region.

Swedish and Norwegian researchers have collaborated on analysing the DNA in 9500-year-old bone samples from the southern and western Norwegian coast and from the Swedish islands of Gotland and Stora Karlsö. This period corresponds to the Mesolithic Stone Age.