13,500-year-old carved bison bone fished from the bottom of the North Sea 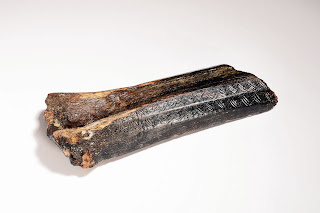 he carved bison bone was fished out of the North Sea in 2005 and dates to the last Ice Age
[Credit: Rijksmuseum van Oudheden]

Late Ice Age hunter gatherers roamed the area that became the North Sea but very little evidence of their presence has been found. But sometimes the sea floor yields treasures that shed light on the period. This is a confirmation, the article says, of ‘the importance of continental shelves as archaeological archives’.

In 2005 a Dutch fishing vessel caught a bison bone in its nets on the border of the Dutch part of the continental shelf. The bone, which had a distinctive zigzag pattern carved in it, ended up in the hands of a collector who, the NRC writes, ‘had good contacts with fishermen’ and agreed to let experts at the Leiden archaeological museum take a look at it.

Carbon isotope analysis showed the bone to be 13,500 years old and part of a culture that decorated animal bones with zigzag and herringbone motives. Only three other similarly carved objects have been discovered so far: a horse’s jaw in Wales, deer antlers in Northern France and moose antlers in Poland.