Neanderthals' lack of drawing ability may relate to hunting techniques 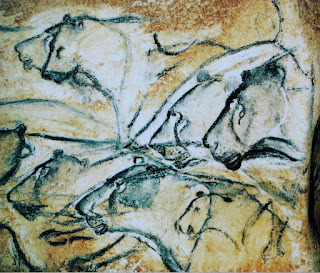 Replica of drawing of lions painted in the Chauvet Cave. Art in the cave has been identified
as created by early modern humans [Credit: UC Davis]

Neanderthals had large brains and made complex tools but never demonstrated the ability to draw recognizable images, unlike early modern humans who created vivid renderings of animals and other figures on rocks and cave walls. That artistic gap may be due to differences in the way they hunted, suggests a University of California, Davis, expert on predator-prey relations and their impacts on the evolution of behaviour.

Neanderthals used thrusting spears to bring down tamer prey in Eurasia, while Homo sapiens, or modern humans, spent hundreds of thousands of years spear-hunting wary and dangerous game on the open grasslands of Africa.

Richard Coss, a professor emeritus of psychology, says the hand-eye coordination involved in both hunting with throwing spears and drawing representational art could be one factor explaining why modern humans became smarter than Neanderthals.