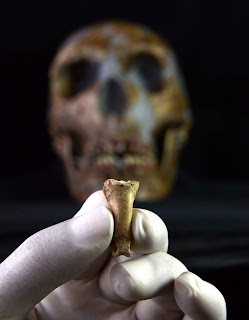 A falange of imperial eagle with marks of court from Cave Foradada
[Credit: Antonio Rodriguez-Hidalgo]

The interest in these findings lies in the fact that it is the most modern piece of the kind so far regarding the Neanderthal period and the first one found in the Iberian Peninsula. This circumstance widens the temporary and geographical limits that were estimated for this kind of Neanderthal ornaments. This would be "the last necklace made by the Neanderthals", according to Antonio Rodriguez-Hidalgo.

"Neanderthals used eagle talons as symbolic elements, probably as necklace pendants, from the beginnings of the mid Palaeolithic", notes Antonio Rodriguez-Hidalgo. In particular, what researchers found in Cova Foradada are bone remains from Spanish Imperial Eagle (Aquila Adalberti), from more than 39,000 years ago, with some marks that show these were used to take the talons so as to make pendants.