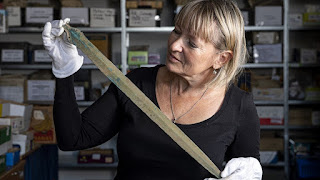 A sword dating back to the early Bronze Age has been unearthed in the region of Rychnov nad Kneznou in north-east Bohemia, according to a recent report by the Czech News Agency.

According to the archaeologist Martina Bekova from the Rychnov museum, the weapon has an ornamental engraving and a very sharp blade.

"The bronze sword with its tongue handle is dated around 1200 BC, it belongs to the Lusatian culture. The findings of this culture are numerous in East Bohemia, but this is not true of swords," said Bekova.

"Only five prehistoric swords have been found in the Czech Republic over the last decade," she adds.

Archaeologists are keeping the exact location of the discovery a secret to protect the site.

A search of the area also yielded several rivets which were used to secure the sword handle to the blade, and a bronze spear head from about the same period.