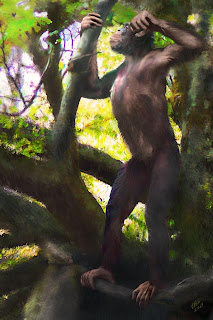 A male Danuvius guggenmosi probably looked something like this
[Credit: Universitat Tubingen]

Our upright posture may have originated in a common ancestor of humans and great apes who lived in Europe - and not in Africa, as previously thought. That’s the conclusion reached by an international research team headed by Professor Madelaine Bohme from the Senckenberg Center for Human Evolution and Palaeoenvironment at the University of Tubingen in a study published Wednesday in the journal Nature and the Journal of Human Evolution. Bohme has discovered fossils of a previously unknown primate in southern Germany. The fossils of Danuvius guggenmosi, which lived 11.62 million years ago, suggest that it was well adapted to both walking upright on two legs as well as using all four limbs while climbing. The ability to walk upright is considered a key characteristic of humans.