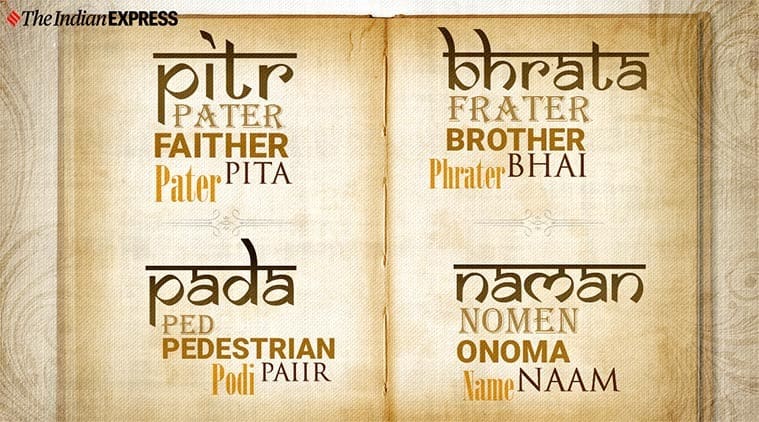 Jones’ claim rested on the evidence of several Sanskrit words that had similarities with Greek and Latin. (Photo created by Gargi Singh)

Newer scholarship has shown that even though Sanskrit did indeed share a common ancestral homeland with European and Iranian languages, it had also borrowed quite a bit from pre-existing Indian languages in India.

In 1783, the colonial stage in Bengal saw the entrance of William Jones who was appointed judge of the Supreme Court of Judicature at Fort William. In the next couple of years, Jones established himself as an authority on ancient Indian language and culture, a field of study that was hitherto untouched. His obsession with the linguistic past of the subcontinent, led him to propose that there existed an intimate relationship between Sanskrit and languages spoken in Europe.

Jones’ claim rested on the evidence of several Sanskrit words that had similarities with Greek and Latin. For instance, the Sanskrit word for ‘three’, that is ‘trayas’, is similar to the Latin ‘tres’ and the Greek ‘treis’. Similarly, the Sanskrit for ‘snake’, is ‘sarpa’, which shares a phonetic link with ‘serpens’ in Latin. As he studied the languages further, it became clearer that apart from Greek and Latin, Sanskrit words could be found in most other European languages.