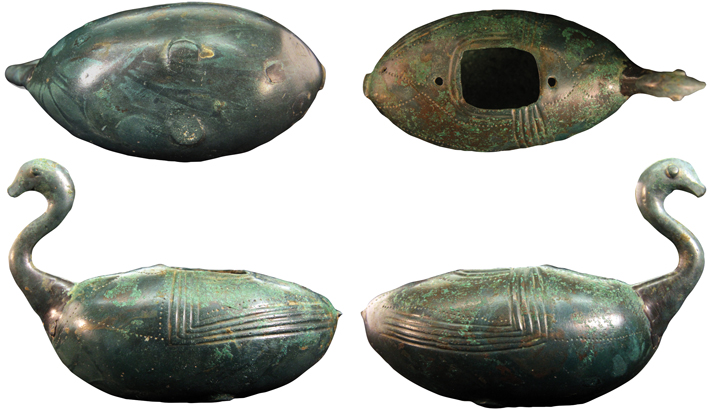 Courtesy Filip Ondrkál)
Bronze lamp, four views
From 1881 to 1890, in locations including modern Slovakia, Hungary, Italy, and Bosnia and Herzegovina, a number of very similar bronze bird figurines dating to the Late Bronze and Early Iron Ages (ca. 1300–500 B.C.) were unearthed. For more than a century, it remained unclear how these artifacts were used, but their similarity was seen as evidence of shared cultural practices and beliefs across a large swath of Europe at this time. Now, a team studying a recently discovered bronze waterbird, perhaps a swan, from the site of Liptovský Hrádok in northern Slovakia, has determined that the artifact, and likely the other similar examples as well, was originally attached to a small chariot, filled with animal fat or vegetable oil and used as a lamp during burial rituals and ceremonial activities.
Read the rest of this article...
Posted by David Beard MA, FSA, FSA Scot at 9:05 AM