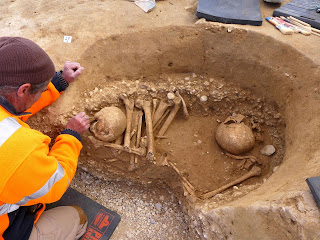 Mesolithic tomb of Casseneuil being cleared
[Credit: Frederic Prodeo, Willford O'yl, Inrap]
The Mesolithic covers a period of 5,000 years, and yet less than fifty burials from this period are known in France. One of them, containing two human remains, has been excavated by a team from Inrap in Casseneuil (a commune in the Lot-et-Garonne department in south-western France) since the beginning of March.
The Casseneuil burial site was discovered in 2008, during a preliminary inspection for the construction of a housing estate. The State (Drac Nouvelle-Aquitaine, regional archaeology service) commissioned the excavation, which is currently underway on a 1500 m² property. The radiocarbon dating recently obtained dates this double burial to around 9000 years before our era, i.e. an early period of the Mesolithic.
Read the rest of this article...
Posted by David Beard MA, FSA, FSA Scot at 9:28 AM