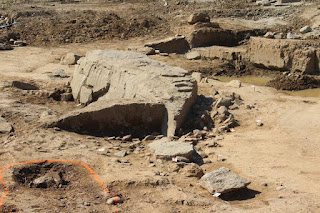 Southern view of the megalithic sector under excavation
[Credit: Florent Notier, Inrap]
In 2018, in the commune of Massongy, a team of Inrap archaeologists excavated a small settlement and a vast megalithic complex from the Middle Neolithic period. Since then, laboratory work has revealed a great deal of information that complements the elements already collected in the field, revealing a site of exceptional importance.
The "Chemin des Bels" site is divided into two main zones: one corresponds to the traces of a village dated to the Middle Neolithic, the so-called "Cortaillod" culture; the other to a vast contemporary megalithic complex. The latter seems to be organised according to a very coherent plan with several phases of development. A large number of artefacts were found in the fill around a large recumbent slab 3.4 m long, 1.1 m wide and 1 m high, weighing around 5 tonnes. These objects show that the various stages of occupation of the site were fairly short (one to two centuries maximum).
Read the rest of this article...
Posted by David Beard MA, FSA, FSA Scot at 5:37 PM