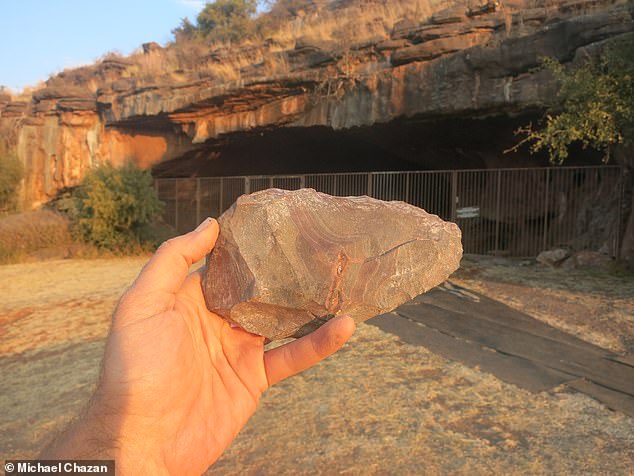 The team explored layers deep within the ancient cave and were able to successfully establish the shift from Oldowan tools, sharp flakes and chopping tools, to early handaxes (pictured) over one million years ago
Ancient tools found in a 'miracle' cave in South Africa suggest our earliest ancestors set up camp there more than 1.8 million years ago, according to palaeontologists.
Experts from the Hebrew University of Jerusalem examined the Wonderwerk Cave in South Africa's Kalahari Desert, delving down to ancient layers within the historic site.
Few places in the world preserve a continuous archaeological record spanning millions of years, but this is one such site. Its name means 'miracle' in Afrikaans.
The new study, including work by geologists and archaeologists, confirms the existence of human-made stone tools dating back 1.8 million years.
This marks it as the earliest cave occupation in the world and the site of some of the earliest indications of fire use and tool making among prehistoric humans.
Read the rest of this article...
Posted by David Beard MA, FSA, FSA Scot at 11:30 AM