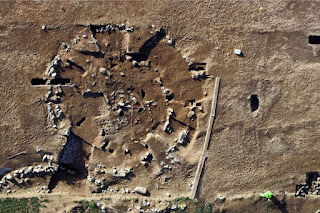 The Iron Age structure uncovered by archaeologists during excavtion work on the new A75 bypass at Dunragit.
Details of a prehistoric Galloway heartland hidden for eight millennia have now been published online.
The major prehistoric treasure trove of a number of ancient sites, artefacts and cremated human remains were discovered in the region during the £17million A75 bypass works in 2014.
The “significant” finds were unearthed around Dunragit by GUARD Archaeology Ltd – working on behalf of Transport Scotland – and stretch across the Mesolithic, Neolithic, Bronze and Iron Ages.
As well as jewellery and cremation urns, they uncovered the earliest known Mesolithic house in south-west Scotland, Neolithic ceremonial structures, two Bronze Age cemeteries and an Iron Age village – which show the use of the land for both hunting and farming for more than 9,000 years.
Read the rest of this article...
Posted by David Beard MA, FSA, FSA Scot at 11:26 AM