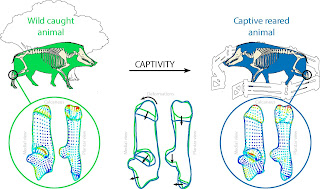 Deformation of the calcaneus (tarsal bone) in wild boars reared in captivity compared to wild boars in their natural environment. The coloured dots indicate the degree of deformation (minimum in dark blue, maximum in red). The deformations are mainly related to an elongation of the muscle insertion area in the highest part of the bone [Credit: Hugo Harbers/AAPSE/CNRS-MNHN]

Until now, archaeozoologists have been unable to reconstruct the earliest stages of domestication: the process of placing wild animals in captivity remained beyond their methodological reach.

Using the wild boar as an experimental model, a multidisciplinary team made up of scientists from the CNRS and the French National Museum of Natural History have shown that a life spent in captivity has an identifiable effect on the shape of the calcaneus, a tarsal bone that plays a propulsive role in locomotion.

Being relatively compact, this bone is well preserved in archaeological contexts, which makes it possible to obtain information about the earliest placing of wild animals in captivity.