How AI could help translate the written language of ancient civilizations 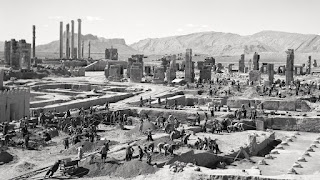 The OI began archaeological expeditions to the ancient city of Persepolis in the 1930s, where the uncovered tens of thousands clay tablets containing cuneiform. A collaboration between the OI and the Department of Computer Science using a machine learning program could allow faster translation of these tablets
[Credit: the OI]

Twenty-five centuries ago, the "paperwork" of Persia's Achaemenid Empire was recorded on clay tablets—tens of thousands of which were discovered in 1933 in modern-day Iran by archaeologists from the University of Chicago's Oriental Institute. For decades, researchers painstakingly studied and translated these ancient documents by hand, but this manual deciphering process is very difficult, slow and prone to errors.

Since the 1990s, scientists have recruited computers to help—with limited success, due to the three-dimensional nature of the tablets and the complexity of the cuneiform characters. But a technological breakthrough at the University of Chicago may finally make automated transcription of these tablets—which reveal rich information about Achaemenid history, society and language—possible, freeing up archaeologists for higher-level analysis.

That's the motivation behind DeepScribe, a collaboration between researchers from the OI and UChicago's Department of Computer Science. With a training set of more than 6,000 annotated images from the Persepolis Fortification Archive, the Center for Data and Computing-funded project will build a model that can "read" as-yet-unanalyzed tablets in the collection, and potentially a tool that archaeologists can adapt to other studies of ancient writing.