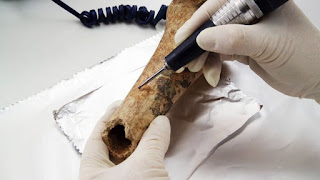 A human femur, thought to be from medieval times, being sampled for carbon dating
[Credit: James King-Holmes/Science Photo Library]

Radiocarbon dating, invented in the late 1940s and improved ever since to provide more precise measurements, is the standard method for determining the dates of artifacts in archaeology and other disciplines.

"If it's organic and old - up to 50,000 years - you date it by radiocarbon," said Sturt Manning, the Goldwin Smith Professor of Classical Archaeology in the College of Arts and Sciences.

Manning is lead author of a new paper that points out the need for an important new refinement to the technique. The outcomes of his study, published in Science Advances, have relevance for understanding key dates in Mediterranean history and prehistory, including the tomb of Tutankhamen and a controversial but important volcanic eruption on the Greek island of Santorini.

Radiocarbon dating measures the decomposition of carbon-14, an unstable isotope of carbon created by cosmic radiation and found in all organic matter. Cosmic radiation, however, is not constant at all times. To account for fluctuations of cosmic radiation in the Earth's atmosphere, the radiocarbon content of known-age tree rings was measured backward in time from the 20th century, for thousands of years.