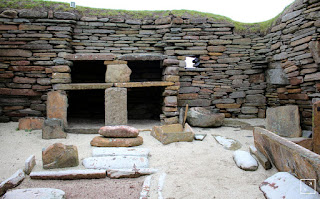 The Orkney Islands, situated off the north coast of the Scottish mainland, are home to more than 3,000 historical sites.

Evidence has been found of human habitation there going back 8,500 years. Some buildings on the islands date to the Iron Age, Viking rule and medieval times.

But around 1,000 sites are situated on the coastline and are under threat.

One such site is the Iron Age building South Howe Broch on the island of Rousay. Dating from between 600-400AD, the sea has taken much of the site’s western area. Now the broch wall itself is falling into the sea.