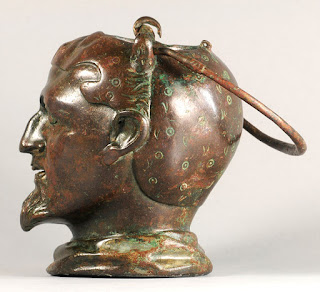 Dating back about 1,800 years, the brass balsamarium shows the head of a man wearing
a cap made from the skin of a feline [Credit: Daniela Agre]

The skeleton of an ancient sports fan was discovered alongside an 1,800-year-old jar shaped like the head of a wrestler or boxer who may have had his nose broken, archaeologists reported

The "spectacular" balsamarium — a jar used to store liquids such as balm or perfumes — was found in a grave in southeastern Bulgaria (ancient Thrace).

It dates to a time when the Roman Empire controlled Thrace — an ancient area that encompassed parts of Bulgaria, Greece and Turkey.