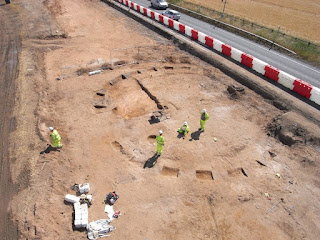 An enclosure measuring 16 metres across is believed to date from the Iron Age
[Credit: City of York Council]

The earliest find – a large ring ditch which could have been an enclosure or roundhouse – appears to date from the Iron Age, around 2,500 years ago. At around 16 metres in diameter, it is one of the biggest to be unearthed in York.

Pits and what looks to be a hearth have been found alongside, during roadworks at the roundabout of the junction with the road to Wetherby, on York’s outer ring road

A nearby ditch has produced a series of related finds, including decorated pottery fragments, a piece of quern-stone and industrial waste material in the form of molten slag.