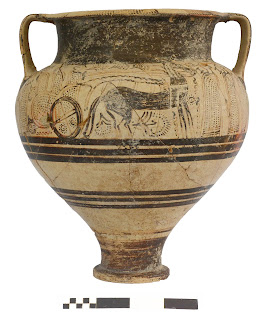 The Department of Antiquities in Cyprus announced that, during five weeks in April and June 2018, a Swedish team, headed by Professor Peter M. Fischer from the University of Gothenburg, carried out excavations at the Late Cypriot harbour city of Dromolaxia-Vyzakia (Hala Sultan Tekke). The team consisted of 27 students and specialists. Amongst the latter were those trained in osteology, botany, conservation, Aegean and Near Eastern ceramics, and geophysical prospecting.

In June 2017, the site was surveyed with a magnetometer with ten sensors mounted on a 5 m wide cart. This arrangement allowed the mapping of 23 hectares within a week, demonstrating stone structures and “pits” down to a depth of roughly 1.5 m.

The architectural remains point to numerous man-made structures in the entire area of the survey, demonstrating the vast extent of the city. In 2018, 0.6 hectares of the magnetometer-surveyed area were re-investigated with georadar in order to see details of the buried features which facilitates the subsequent excavations.

However, the results of the georadar survey were of limited value: the strong radar attenuation at the site, due to clay-rich soil, did not allow electromagnetic waves to penetrate deeper than a few decimeters from surface.