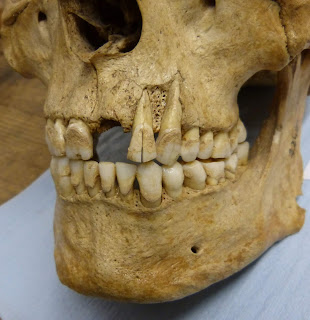 Skeleton sampled for the study, dating to the post-medieval period in Britain. The analysis suggests the Victorians were partial to a bowl of porridge, while in modern diets potatoes, soybeans and peanuts are flavour of the day
[Credit: Camilla Speller, University of York]

Dental plaque accumulates on the surface of teeth during life and is mineralised by components of saliva to form tartar or "dental calculus", entombing proteins from the food we eat in the process.

Identifying evidence of many foods, particularly plant crops, in diets of the past is a challenge as they often leave no trace in the archaeological record. But proteins are robust molecules that can survive in tartar for thousands of years.

Archaeological tooth tartar has previously been shown to preserve milk proteins, but the international study, led by researchers at the University of York and the Max Planck Institute for the Science of Human History, has proved for the first time that it can also reveal more precise information about a wider range of food proteins, including those from plants.

The discovery could provide new insights into the diets and lifestyles of our ancestors, adding to the value of dental remains in our understanding of human evolution.