Lessons From A Real Atlantis 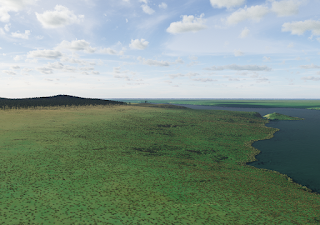 Before it was lost to the bottom of sea, Doggerland was made up of woodland, meadows, marshes and rivers,  as shown by simulations [Credit: Philip Murgatroyd]

The discoveries, both on land and underwater, are helping to fill in some of the blanks about Europe’s prehistory and are offering insights into how our species responded to global climate change in the past.

Around 8,500 years ago, after the end of the last ice age, global warming triggered huge rises in sea levels due to the melting of glaciers and ice sheets that had covered much of the northern hemisphere.

An area of land twice the size of the European Union was lost to the rising seas, prompting mass migration across the continents.

Much of the human experience of this cataclysm, however, has remained buried out of reach of even the most assiduous investigator, leaving a huge gap in the story of our ancestors.