120,000-Year-Old Bone Etchings Believed To Be Among Oldest Evidence Of Human Use Of Symbols 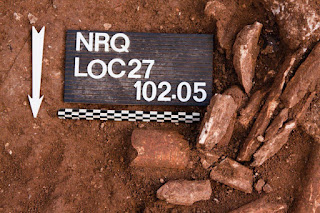 Researchers uncovered the bone fragments while working at the open air site of Nesher Ramla, which also dates back to the Middle Paleolithic era [Credit Dr. Yossi Zaidner]
A recent discovery by archeologists from the Hebrew University and the University of Haifa alongside a team from the Le Centre National de la Recherche Scientifique in France have uncovered evidence of what may be the earliest-known use of symbols. The symbols were found on a bone fragment in the Ramle region in central Israel and are believed to be approximately 120,000 years old.
Remarkably the fragment remained largely intact and the researchers were able to detect six similar etchings on one side of the bone, leading them to believe that they were in the possession of something which held symbolic or spiritual significance. The find, which was recently published in the scientific journal Quaternary International, was discovered in a trove of flint tools and animal bones exposed at a site during archaeological excavations.
Read the rest of this article...
Posted by David Beard MA, FSA, FSA Scot at 4:13 PM