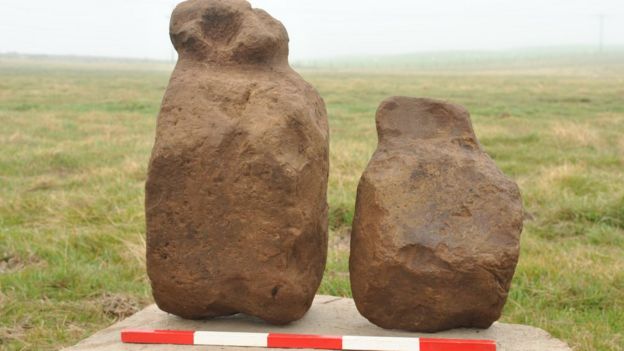 The carvings have all been "pecked" to give them shoulders,
a neck and what looks like a head
Image copyrightORCA ARCHAEOLOGY

Archaeologists working at the site of a proposed electricity sub-station in Orkney have found nine "amazing" stone carvings.

The 50cm (20in) tall sculptures have all been worked to give them shoulders, a neck and what looks like a head.

The first has been nicknamed the "Finstown Fella", after the location of the dig. After it was recognised, eight more were found on the site.

Experts believe they date from roughly 2000BC.

Sean Bell, site director for ORCA Archaeology, told BBC Radio Orkney that they had all been worked using a technique known as pecking - chipping away flakes of stone with a pointed metal or stone tool.