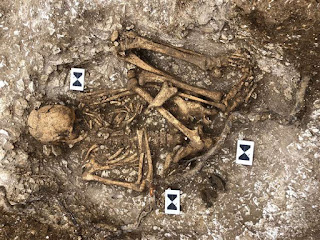 One of the skeletons found at Aylesham [Credit: SWAT via KentOnline]

Two skeletons dating back to the Bronze and Iron Age have been unearthed by archaeologists working on a building site.

The remains were discovered at the Aylesham Garden Village development near Canterbury and are now being examined by experts at the University of Kent to precisely date them and understand why they were buried there.

They are among the latest archaeological finds at the site, with smaller items of pottery and glass, dating from the Roman occupation of 2,000 years ago, also discovered.

The dig is being undertaken for developers Barratt Homes and Persimmon Homes by a team from the Faversham-based Swale and Thames Archaeology (SWAT).