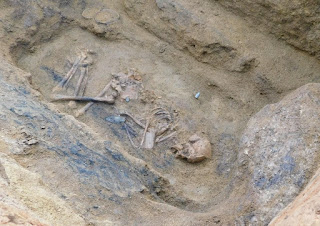 For two millennia, he had been resting untouched in the earth, in the hollow of what had been his tomb, untouched since his burial. It took only an earthmover and an attentive worker whose gaze was caught by the presence of a shiny object in the overturned earth to uncover the grave of a high Germanic dignitary dating back to the second half of the 1st century AD at Uhersky Brod (south-eastern Moravia), near the Slovak border. This is a particularly rare find according to the archaeologists in charge of the site, and should tell them more about this region at the foot of the White Carpathians, about 200 kilometres from the Roman limes.

"This discovery must be placed in its historical context. Dating places it back to Roman times, but it should be remembered that at that time the Czech and Moravian territories, i.e. the territory of the present-day Czech Republic, were located in an area called the Barbaricum, i.e. beyond the Roman Empire's limes."