Discovery of 311 implements on Indonesian island suggest modern humans settling there 60,000 years ago would have met an ‘isolated human lineage’ 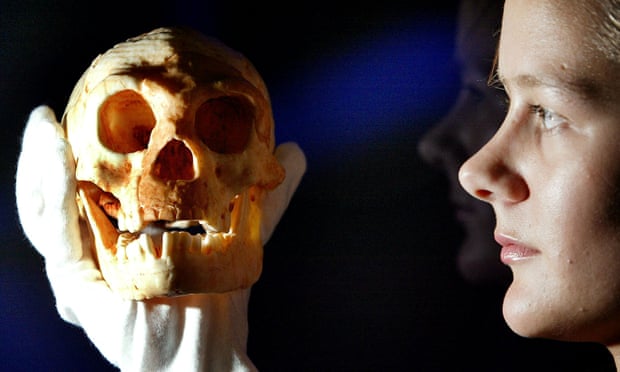 A model of a skull from a species of Hobbit-sized humans called Homo floresiensis, which was found in a cave on the Indonesian island of Flores. Scientists now believe they may have had relatives on other islands.
Photograph: Stephen Hird/Reuters/Corbis

The diminutive prehistoric human species dubbed the “Hobbit” that inhabited the Indonesian island of Flores long before the arrival of Homo sapiens apparently had company on other islands.
Stone tools that are at least 118,000 years old have been discovered on the island of Sulawesi, indicating a human presence, scientists said on Wednesday. No fossils of these individuals were found in conjunction with the tools at the site called Talepu, leaving the toolmakers’ identity a mystery.
Read the rest of this article...
Posted by David Beard MA, FSA, FSA Scot at 4:50 PM