Parts of what is believed to be Dorset's oldest human settlement could be lost to coastal erosion, archaeologists have warned. 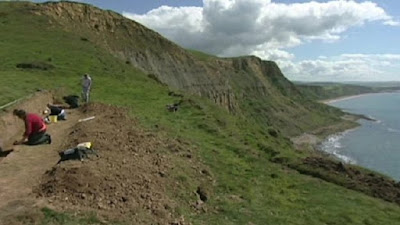 Excavations were carried out in 2009, metres from the cliff edge  at Doghouse Hill
[Credit: Paul Baker]

Hunter-gatherers lived on Doghouse Hill near Seatown up to 10,000 years ago. The settlement was on land a mile inland, but erosion means it is now on a cliff edge which has crumbled further during the winter storms. Archaeology writer Paul Baker said there was an "imminent danger" of landslips.

The National Trust, which owns Golden Cap Estate, led excavations in 2009 that unearthed a stone hearth, fire pit and pot shards from Bronze Age periods (2,500 to 1,000BC) and other relics from the Mesolithic Age (10,000 to 4,000BC) when Dorset was inhabited by hunter-gathers living off the land.