Scientists believe that they have identified the oldest known images of erupting volcanoes, daubed in red and white pigments over other cave paintings in south-eastern France around 36,000 years ago. 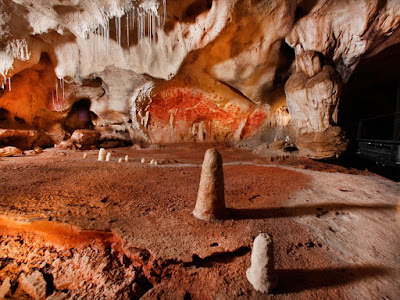 Scientists may have discovered the oldest images of a volcano in the world after  finding cave paintings of a disaster 36,000 years ago in the Chauvet caves  [Credit: Getty Images]

The puzzling and apparently abstract images were first found in 1994 among startlingly precise paintings of lions, mammoths and other animals at a complex of caverns at Chauvet in the Ardèche.

A team of French scientists, ranging from geologists to palaeontologists, now believe that the surging, fountain-like images are the only example in Europe of prehistoric paintings of landscapes or natural phenomena. The oldest images of volcanoes previously identified were drawn 8,000 years ago at Catalhoyuk in central Turkey.