Britain's Pompeii? Well, we can dream


You may snort at the fact that a bronze-age village has been compared to the most famous Roman site in the world. But what we lack in grandeur we make up for in romanticism 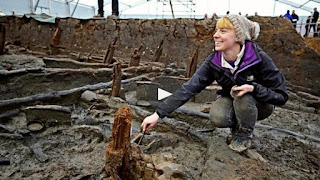 They’re calling it Britain’s Pompeii, after the well-preserved Roman town in the heart of Italy. There, temple columns stand tall against the sky and it’s easy to squint and imagine that the crowds milling around are wearing togas and buying tickets to see someone get eaten by a lion.


Britain’s Pompeii isn’t a Roman ruin, it’s a bronze-age one. But you still might be expecting something dramatic; standing stones, maybe, or a burial labyrinth. Actually, it’s quite a lot of wood, in a sort of bog. It looks like a wet weekend in East Anglia. It is.
To be fair, it’s an extraordinary find and will shed new light on the way humans lived on these islands a thousand years before the birth of Christ. There are wooden pots, glass beads and preserved textiles showing fibres woven by hand in patterns that would be familiar to us today. Archaeologists are right to be excited. Comparing it to Pompeii is a way of getting across how important they think it is. It may revolutionise our understanding of British bronze-age culture, the way the excavations in the shadow of Vesuvius did with Roman life.
Read the rest of this article...
Posted by David Beard MA, FSA, FSA Scot at 6:03 PM