Recent fieldwork at the ancient city of Knossos on the Greek island of Crete finds that during the early Iron Age (1100 to 600 BC), the city was rich in imports and was nearly three times larger than what was believed from earlier excavations. 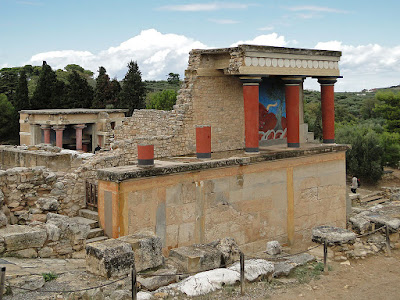 The North Portico at the Minoan palace of Knossos  [Credit: Bernard Gagnon/WikiCommons]

The discovery suggests that not only did this spectacular site in the Greek Bronze Age (between 3500 and 1100 BC) recover from the collapse of the socio-political system around 1200 BC, but also rapidly grew and thrived as a cosmopolitan hub of the Aegean and Mediterranean regions. Antonis Kotsonas, a University of Cincinnati assistant professor of classics, will highlight his field research with the Knossos Urban Landscape Project at the 117th annual meeting of the Archaeological Institute of America and Society for Classical Studies. The meeting takes place Jan. 7-10, 2016 in San Francisco.