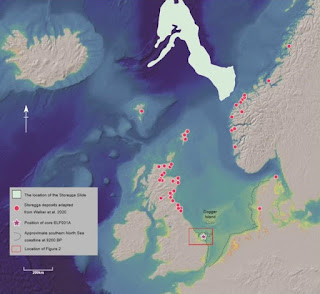 Evidence of the catastrophic event has already been found in onshore sediments in Western Scandinavia, the Faroe Isles, northeast Britain, Denmark and Greenland but now for the first time confirmation of the event has been found on the UK’s southern coasts.

The giant tsunami, known as the Storegga Slide, was caused when an area of seabed the size of Scotland (measuring some 80,000sq km and around 3,200 cubic km) shifted suddenly.

This triggered huge waves that would have brought devastation to an inhabited ancient land bridge, which once existed between the UK and mainland Europe - an area known as Doggerland - that is now submerged beneath the North Sea.