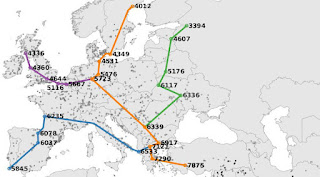 The four major axes of expansion of the Neolithic migration, with key dates noted
[Credit: University of Roehampton]

The research, a collaboration between the University of Roehampton, the University of Cambridge and several other institutions, combined archaeological data with palaeoclimatic reconstructions to show for the first time that climate dramatically impacted the migration of people across Europe, causing a dramatic slowdown between 6,100 BCE and 4,500 BCE.

The research team, including Dr. Lia Betti, Senior Lecturer of the University of Roehampton, assembled a large database of the first arrival dates of Neolithic farmers across the continent and studied the speed of their migration in relation to climatic reconstructions of the time. They also re-analysed ancient DNA data to understand the interaction between early farmers and local hunter-gatherers.

They discovered migration started quickly out of south-eastern Europe, with Neolithic farmers pushing out the existing hunter-gatherer population. This was demonstrated by how little the DNA of the two groups mixed. As they moved north, the climate became less suitable for the crops they had bought with them. Their pace of movement slowed, changing how they interacted with local hunter-gatherers, which can be seen through increased genetic admixture of the two groups.