Destruction wreaked along Connacht’s coastline in the recent storms has exposed archaeology dating back to the Neolithic period on Connemara’s Omey island. Large linear archaeological deposits of up to a metre thick have been exposed on the western and northern shorelines of the tidal island off Claddaghduff. 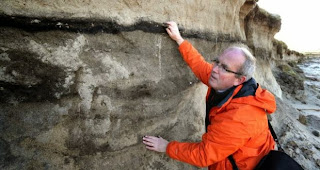 Archaeologist Michael Gibbons at the area on Omey Island where prehistoric remains were revealed by damage caused by the Atlantic storms [Credit: Joe O’Shaughnessy]

Two sets of medieval burial sites, traces of sunken dwellings and parts of a Neolithic bog, which had been covered over millenniums by shifting sands, have been revealed.