Big brains, no fur, sinuses … are these clues to our ancestors' lives as 'aquatic apes'? 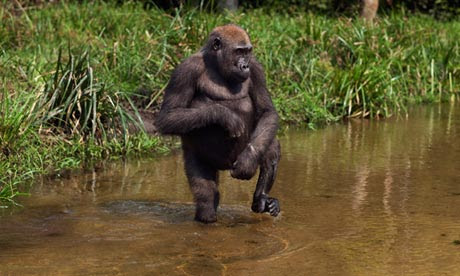 A female western lowland gorilla walks through a river. Some scientists believe our ancestors lived an aquatic lifestyle. Photograph: Getty
It is one of the most unusual evolutionary ideas ever proposed: humans are amphibious apes who lost their fur, started to walk upright and developed big brains because they took to living the good life by the water's edge.
This is the aquatic ape theory and although treated with derision by some academics over the past 50 years, it is still backed by a small, but committed group of scientists. Next week they will hold a major London conference when several speakers, including David Attenborough, will voice support for the theory.
"Humans are very different from other apes," said Peter Rhys Evans, an organiser of Human Evolution: Past, Present and Future. "We lack fur, walk upright, have big brains and subcutaneous fat and have a descended larynx, a feature common among aquatic animals but not apes."