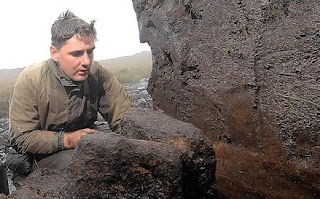 What did Britain look like before mankind turned up and started changing things thousands of years ago? It's a question many people ask – and now some answers are being found on the roof of Dartmoor.

Using the latest technology in two separate projects, scientists have been delving into the moor's infamous peat bogs to find out what the world was like when extinct creatures like the giant aurochs were still roaming around the South West.

Palaeoecological and archaeological surveys of Dartmoor Mires Project restoration areas have been undertaken by Dr Ralph Fyfe and his team at the University of Plymouth, while Dr Phil Newman has produced an extensive and up-to-date study of the peat-cutting industry on the north moor.