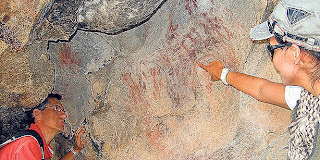 Thousands of rock carvings discovered at the beginning of the 1990s in the ancient city of Heraklia at Latmos in southwestern Turkey are faced with destruction due to plans to open a stone quarry at the site.

At the beginning of the '90s, many rock carvings were discovered at the Five Finger Mountains in research by Dr. Anneliese Peschlow-Bindokat from the German Archaeological Institute. The carvings have been dated to the sixth to fifth centuries B.C., and are considered one of the most significant discoveries of Near Eastern archaeology. However, seven feldspar stone quarries have been opened in the vicinity to meet the demand for raw material to be used in the production of glass, ceramics and in the dye industry in recent years. There are now new plans to opening further quarries close to the site where most of the carvings are located.

According to the Radikal daily, Peschlow is now preparing a report for the United Nations Educational, Scientific and Cultural Organization (UNESCO) and the Muğla and Aydın Board of Cultural and Natural Heritage to save the area from destruction.