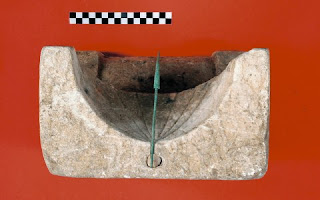 The ancient sundial dating from the Greco-Roman period found in Polichrono in Chalkidiki [Credit: Greek Reporter]

One of the rarest sundials dating from the Greco-Roman period was found in Polichrono in Chalkidiki, northern Greece. This sundial is not a usual one as it shows the correct time at any given place.

It is noteworthy that in the Ancient Greek world, sundials consisted of a gnomon (indicator) in the form of a vertical post or peg set in a flat surface, upon which the shadow of the gnomon served to indicate the time.

This sundial has a surface which is separated in 12 parts representing 12 hours of the day. More particularly, the sundial consists of a hyperbola tracing the shadow’s path at the winter solstice, a second one for the summer solstice, and a straight east-west line in between marking the equinoctial shadows.