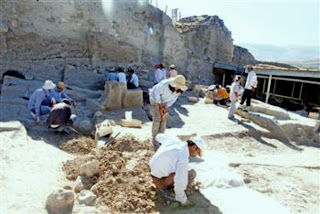 The large building unearthed during the Aslantepe excavations in Malatya shows that there was an important person lived there, according to archaeologists [Credit: Hurriyet/AA]

Excavations at the Aslantepe tumulus near the central Anatolian city of Malatya have unearthed a large building containing two spearheads and a necklace, all of which appear to date to the early trans-Caucasian culture.

Excavation work continued this year on part of a structure in the southern portion of the tumulus that is believed to be the world’s first palace, the head of the Aslantepe excavations, Professor Marcella Frangipane of Rome’s La Sapienze University, told members of the press. Some other buildings found to the north of the palace in earlier phases of the excavation date from the Bronze Age, she said.

“We also dug below part of a city wall dating back to 2,800 B.C., and found a palace hall underneath it. In the middle of this hall, we found a large Bronze-Age building, reflecting features common to the early trans-Caucasian culture. So far only smaller buildings belonging to this culture have been discovered; this is the first time we have found such a large building. It shows us that there was an important person here,” Frangipane said.