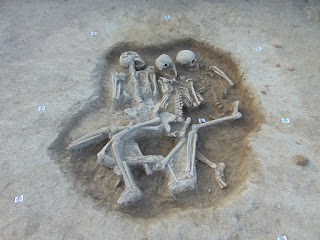 While excavating one of the trenches in the highest part of Kovači in 2019, we discovered a triple Copper Age (?) burial, possibly dating to the period of Kostolac Culture (3250-3000 BCE). Burials of this kind are extremely rare in Croatia and this seems to be the earliest one (other similar examples are known from the famous site of Vučedol, but are connected to the later layers of Vučedol culture).

The burial was discovered in almost completely sterile soil above the bedrock, with no traces of a grave pit. Three individuals were buried together and numbered from 1 to 3 (left to right in the above photo).

The bodies of Individuals 1 and 3 were positioned in the same way. They were on their backs, but with their legs leaning to the right, as if they were stepping forward. Their arms were bent in the elbows and pulled to their chests.

Their faces were probably facing east. Individual 1 was a 20-30-year-old female and Individual 3 a 25-35-year-old male. The individual in the middle (Individual 2) was a female between 30 and 40 years of age. She was facing the ground.