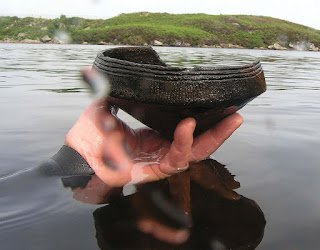 When it comes to studying Neolithic Britain (4,000-2,500 B.C.), a bit of archaeological mystery is to be expected. Since Neolithic farmers existed long before written language made its way to the British Isles, the only records of their lives are the things they left behind. And while they did leave us a lot of monuments that took, well, monumental effort to build—think Stonehenge or the stone circles of Orkney—the cultural practices and deeper intentions behind these sites are largely unknown.

Now it looks like there may potentially be a whole new type of Neolithic monument for archaeologists to scratch their heads over: crannogs.

Artificial islands commonly known as crannogs dot hundreds of Scottish and Irish lakes and waterways. Until now, researchers thought most were built when people in the Iron Age (800-43 B.C.) created stone causeways and dwellings in the middle of bodies of water. But a new paper published today in the journal Antiquity suggests that at least some of Scotland’s nearly 600 crannogs are much, much older—nearly three thousand years older—putting them firmly in the Neolithic era. What’s more, the artifacts that help push back the date of the crannogs into the far deeper past may also point to a kind of behavior not previously suspected in this prehistoric period.