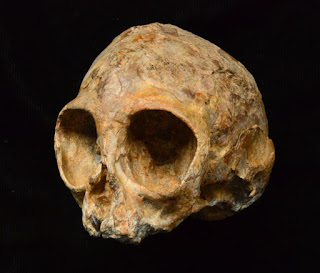 The discovery in Kenya of a remarkably complete fossil ape skull reveals what the common ancestor of all living apes and humans may have looked like. The find, announced in the scientific journal Nature, belongs to an infant that lived about 13 million years ago. The research was done by an international team led by Isaiah Nengo of Stony Brook University-affiliated Turkana Basin Institute and De Anza College, U.S.A.

Among living primates, humans are most closely related to the apes, including chimpanzees, gorillas, orangutans and gibbons. Our common ancestor with chimpanzees lived in Africa 6 to 7 million years ago, and many spectacular fossil finds have revealed how humans evolved since then.

In contrast, little is known about the evolution of the common ancestors of living apes and humans before 10 million years ago. Relevant fossils are scarce, consisting mostly of isolated teeth and partial jaw bones. It has therefore been difficult to find answers to two fundamental questions: Did the common ancestor of living apes and humans originate in Africa, and what did these early ancestors look like?